In fact, models.com has him listed in its Top 50 Male Models as well as in its list of S*x*est Men. Here’s what they are saying about this 24-year-old Latino looker about being one of the world’s top male models:

Rugged and masculine, this Argentine quit rugby and his nutrition studies to focus on modeling, a decision that has paid off nicely as he became a favorite of Riccardo Tisci’s at Givenchy last year, walking in two shows and scoring a spot in the Fall campaign by Mert and Marcus. An opening spot at Dolce & Gabbana’s show in January this year has led to an appearance in the house’s lush, nighttime forest campaign this Fall.

And let’s check out his modeling pics, shall we? 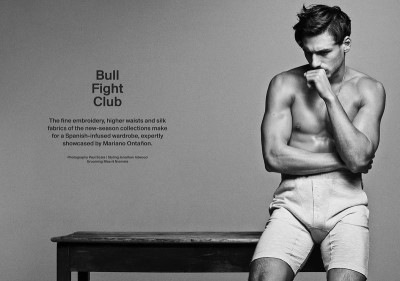 Mariano gets intimate with fellow male model Dominik Bauer in this advertising campaign for MSGM (Fall/Winter 2014/15): 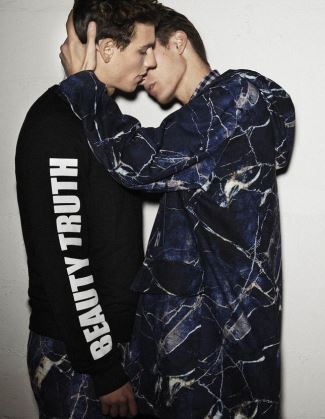 Mariano in tighty whitie briefs in an editorial for Made in Brazil Magazine (photo by Dean Isidro): 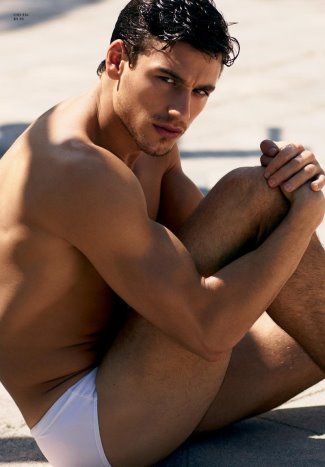 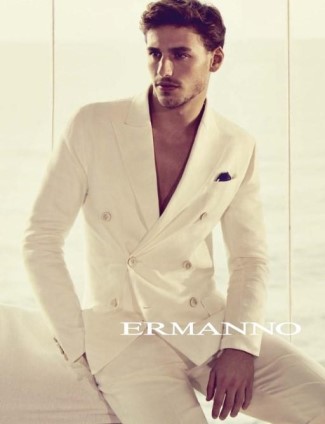 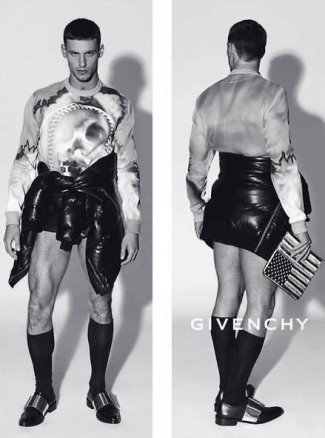 We learn more about Mariano in this Q&A interview with Details Magazine:

How were you discovered?
I was on my way to class, and when I got off the bus, a guy stopped me on the street and asked if I wanted to try modeling. I’d been scouted when I was 16, and I did three commercials but not really any modeling. So I checked out who the guy was. He was in PR, and he had a lot of friends who were photographers or worked at agencies, so it started there.

How did you decide to study nutrition?
I played rugby for 15 years, so I love sports, and I love food as well. My mom is a food engineer, and I used to want to be a chef. I had all these influences towards sports and food, so I wanted to study nutrition. In my country, rugby is not professional, so you don’t get paid to play, but sports nutrition was a way for me to still be close to the sport.

How did you get started playing rugby?
When I was young, I played soccer because it’s huge in Argentina, but I was really, really bad. My dad used to play rugby, so I thought I should give it a try instead. I started playing with some friends from school and I couldn’t stop. It’s hard to explain, but when you go out on the field with 14 other people that you’ve known for your whole life, it’s an amazing feeling. People say soccer is a gentlemen’s game played by hooligans and rugby is a hooligans’ game played by gentlemen, and it’s totally true. I think it teaches you a lot of things about life.

What’s was your most memorable modeling job?
I’ve had two really nice experiences. One was opening the fall 2014 Dolce & Gabbana show. I was really, really nervous because I haven’t done a lot of shows. At the time, I had only done Givenchy twice, and then I was opening the Dolce show, which was shocking. The other was the Givenchy campaign with Riccardo Tisci and photographers Mert Alas and Marcus Piggott. I didn’t realize the magnitude of the situation or how big the photographers were. Now I think about that and I’m like, “That was amazing.” I wasn’t even modeling full-time then. I was still going to college in Argentina, so I was not thinking about this as a job. Now I think it’s more of a lifestyle. It’s not just a job, because you have to adapt to it. Sometimes you adapt your job to your life, but with modeling it’s the other way around. You adapt your life to your job. I had to leave everything: rugby, my friends, my family.

Why did you decide to quit rugby?
If you know rugby, you know that eventually you will get hurt. If you have a rugby match and a shoot after and you get punched in the face, that’s it, you can’t do the shoot. It’s a normal part of the game. In the beginning, my friends made a lot of fun of me because my town is small and people there are not used to this kind of thing.

What’s the most surprising thing you’ve learned about the industry?
It takes time, but I think you get used to everything. There wasn’t anything really surprising, because in the beginning you talk to people and everybody tells you all the things that could happen. I think in the beginning you have an innocence and can get confused in some situations, but if you get into this business, I think you know what you’re going to deal with. I could go back to my country this week and have to wait two months or more for my next job, which was a little surprising, but it’s part of the game and you get used to it.