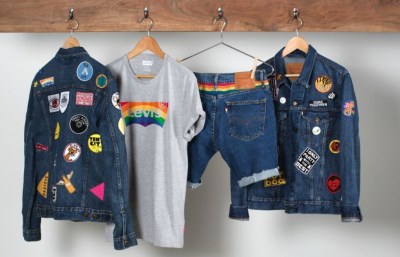 Gay Jeans Commercials. Is Levis the most gay supportive of the big denim companies out there? We think so. It has been supportive and accepting of the LGBT community years before such support and acceptance became mainstream. Oh, and because of its pro-LGBT stance, Levis has been getting hate and boycott threats from groups such as Stormfront and some extreme right-wing Christians such as the blowhard that is Bill Donohue.

Anyhoo, in time for this years pride month celebration, the denim company is coming out with a Levi’s 2015 Pride collection which is meant “to educate consumers about the history of the LGBTQ equality movement”.

Says Levi’s Denim Merchant Thomas Tolerico of this year’s Pride Collection, “We wanted to make consumers a little more familiar with the cause and honor those who fought so hard to have Pride festivities.”

More from the Levi’s media release:

For 2015, the first event selected from the timeline as the creative inspiration is the Stonewall riots of 1969. Stonewall is considered the first gay rights protest prompting the foundation of gay rights organizations.

“It’s all about honoring that day when a community of people stopped being victimized by local police and stood up for themselves,” said Thomas. He also noted that celebrating Stonewall supports Levi’s legacy as uniform of progress — they’ve heard anecdotes from a lot of people that were actually wearing Levi’s at the Stonewall Inn during the riots.

This is a cool thing for Levi’s to do. After all, according to gay diva Kathy Griffin, gay kids these days are not very familiar with their LGBTQIA history.

Okay, let’s end this post by revisiting some of the Levi’s pro-equality commercials released over the years:

Our next Levi’s LGBT-themed commercial is from from 2010 (but maybe we are mistaken):

This is for girls who like girls. Released in 2008:

That’s it for now fellow JeansWatchers! If you know of a denim company that is just as supportive (or more so) of the LGBT community as Levis, do tell in the comments. We’d like to blog about them for our Gay Jeans 2015 series.