We here at Famewatcher are love, love, loving Becky Williams (played by Gabourey Sidibe). And, why not? She’s sassy. She’s got a good heart. She loves Jamal Lyons (played by the now out Jussie Smollett). And she’s pretty stylish too. Let’s check out some of the Gabourey Sidibe Empire Becky dress and outfits, shall we?

Let’s star with this Power Rangers inspired ensemble which shows the playful side of Becky. 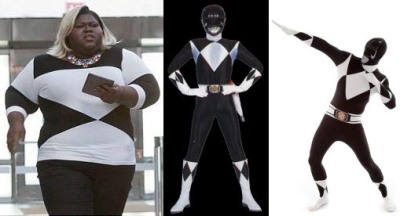 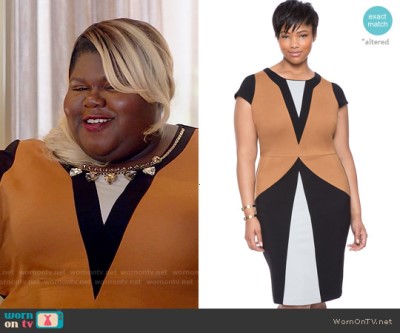 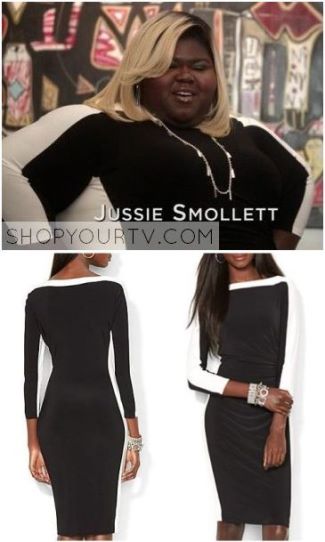 The guy behind Becky’s stylish style is costume designer Paolo Nieddu. Here’s what he says about the sassy assistant’s style (via NY Daily News):

“I wanted her clothes to be not an afterthought: ‘Hey, there’s the big girl in the black tunic,’” he says. “Her clothes have shapes and silhouette. She is wearing full skirts and blouses. Her look is inspired by a mix of Oprah and Michelle Obama, but the young way.”

Becky was promoted from an assistant at Empire to head of A&R, and that’s reflected in her appearance.

In an interview with the Chicago Tribune, Gabourey talks about how plus size fashion is inching forward through the years:

Q: Do you think that fashion and body image have progressed for the positive over the past few years, or not?

A: Look, when I was a kid, the only plus-size kinds of clothes that I could wear were the plus-size clothes that my mom or my aunt would wear. My mom’s 30 years older than me. We don’t have the same style. But now I think there has been a huge movement in the plus-size arena. There’s Curvy Con. It’s like a plus-size fashion convention, and there’s more out there for us. I think there’s more of us with more style and more gumption.

That’s it for now, watch out for more Gabourey Sidibe Empire Becky Dress and Outfits in the future.