Jussie Smollett Gay or Straight? Jussie Smollett plays a gay guy on TV but what is his sexual preference in real life? Is he gay, straight, bisexual, questioning, or curious? Well if you believe our friends at gayorstraight.com, the 31-year-old Brazilian-born American actor is “quite straight”. More from said site:

So there you go! We must say that we agree with the above rating, by the way.

We can’t find any info on Jussie’s current relationship status such as whether he is dating anyone — a boyfriend or a girlfriend. In the past however, he reportedly dated Raven Symone according to dating history website famousfix.com.

Oh wait, didn’t Raven come out last year as a lesbian? Well, well, now it is getting interesting. Maybe there’s truth to the rumor that Jussie and Raven had a baby together through artificial insemination? From bossip.com:

This dude up top with Raven Symone is supposedly Jurnee Smollet’s gay brother, Jussie Smollet. Well, we received a tip stating that he donated his sperm to his best friend Raven and she NOW has a baby girl.

It’s been nearly six years since Bossip published the above story and we’re going to put it in the “unsubstantiated rumor” column. First of all because Raven denied that she ever had a baby and Bossip has not substantiated their report with an actual baby.

Anyhoo, here are fabulous shirtless photos of Jussie who’s currently starring in Empire, one of the biggest hits in television. Ain’t he hawt? 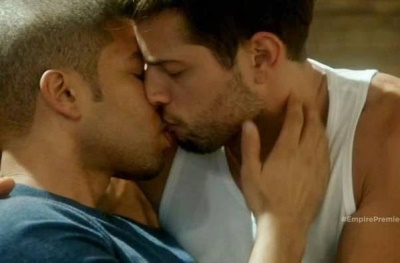 In an interview with xfinity.com, here’s what he says about watching himself on TV:

How have you felt watching yourself in the show?
JS: I’ve really enjoyed it. Usually I’m really hard on myself and so I try not to watch it too much because I’ll be picking at it but it’s odd because when I watch Empire I’m able to get lost in the show because I love the show that much. I always say, I would watch Empire whether I was on it or not. I love the show and I feel like it’s really a good piece of work. I just love it. So I’m able to step outside of it and just watch the show. There’s always that first time when you watch it and you go ‘Aw, they used that edit.’ Then you have to take yourself out if it and go, ‘That was a great episode.’