Fashion for Women in Their 40s. Who’s looking better in their evening get-up? Lisa Kudrow in her dress pants and jacket or Courteney Cox in her above-the-knee dress? Sorry Lisa, you are our favorite Friends star but Courteney (our third favorite after Joey) wins this one. We think Courteney dressed for the occasion while Lisa looks like she attended a PTA meeting and went straight to this benefit gig (this is a benefit gig right?) 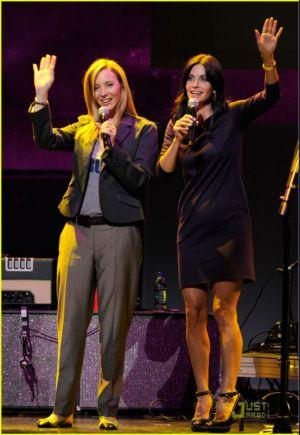 We think they are singing “Smelly cat, smelly cat….” 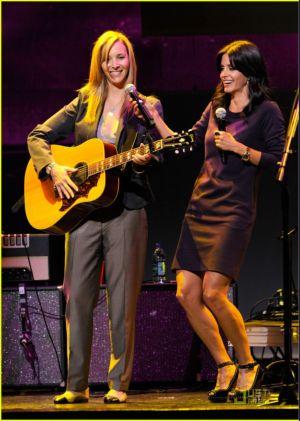 Courteney Cox’s Rolex Day-Date Watch (07 August 2010). Want more celebrity ladies watches? Here’s Courteney Cox and her Rolex Day Date watch. Courteney, of course, is the star of the ABC hit show Cougar Town which is about the many adventures of a woman in mid-life. Well, it started that way in its first season. Now, we’re now told that they are expanding the focus of the show because they can’t spend every episode showing a forty-something woman banging a younger guy. 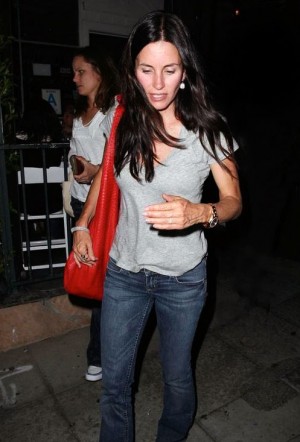 …..
Short Shorts for Girls: Courteney Cox in Nike Shorts (25 January 2010). Courteney Cox wears a pair of Nike tennis shorts during a shooting for her hit show, Cougar Town. Want to see more fashion in Cougar Town? Check out Courteney’s underwear and her bathrobe [below]. Okay, the bathrobe thing isn’t fashion at all but we promise to blog more about what them Cougar Town characters are wearing in the near future. 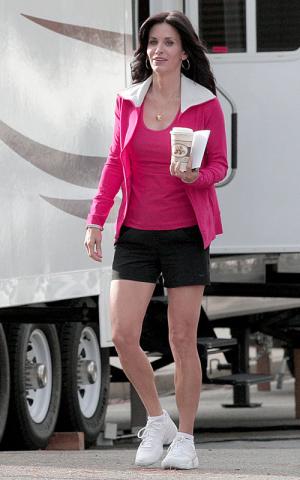 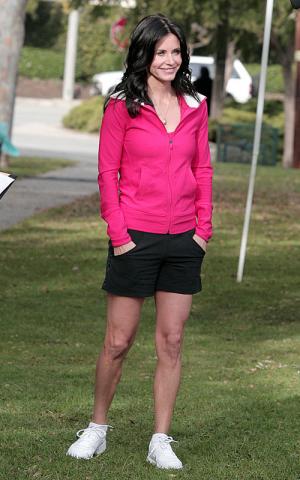 Anyhoo, aren’t you glad Courteney is nominated for a Golden Globe acting award for her role in this show? Let’s hope she wins.

Courteney Cox in Cougar Town (28 March 2009). Courteney Cox on the set of her new show, Cougar Town. Great to see this underrated actress and one of our favorite Friends get a new gig. Go, Courteney. Go, cougars!

By the way, Courteney aka Monica Geller (turned Bing) is probably our third favorite friend in “Friends”. Our favorite, without a doubt, is Lisa Kudrow aka Phoebe Buffay who’s way ahead of her peers. Then our next favorite would be Joey Tribbiani and Chandler Bing. We can’t decide on who of them comes ahead so we’re going to put them in a tie for second place. Our third favorite is Monica, as we mentioned earlier.

Our least favorite is the annoying Rachel Green (aka the pathetic Aniston who is Rachel Green in all her movies) and Ross Geller (aka David Schwimmer). Ha, we just went down the “Memory Highway” and ended up we blogging about Friends.