Speaking of enhanced men’s sexy underwear, here’s a new design from Andrew Christian which is sure to get the approval of men whether those gifted with big packages or those wishing that they are. 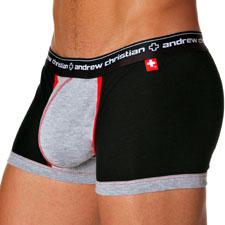 Andrew’s creation reportedly contains a pouch that gently lifts a man’s junk and pushes it forward so his manhood becomes very noticeable. Nice. Why has no one thought of this before? It’s not exactly a revolutionary idea but it goes a long way towards enhancing the male psyche. Hehe.

Designer Andrew Christian explains how his shock jock underwear for men works and the concept behind the design. Nothing revolutionary about it really, its the good old “stuff your undies with something to make it bulge” trick that male models have been doing since time immemorial.

But if you want to give the impression that you are huge down there, then the shock jock is the way to go. What say you Unno enhanced underwear maker?

A skater boy models Andrew Christian’s pushup briefs underwear which we blogged about earlier. If you are a boxers guy rather than a briefs guy, a boxer shorts version of Andrew’s underwear design is after the jump.

We’d like to think that the bankrupt Baldwin brother, aka Stephen Baldwin, would need some help to enhance his package. Him and Bill O Reilly and all those douchebags of Fox News especially Glenn Beck who’s need for penis-enhancing pills has been “documented” by us. Hehe.

We’re all for underwear-enhancement but we think there’s such a thing as too much enhancement to the point of ridiculousness. This Andrew Christian underwear is probably the most ridiculous of them all. Seriously Andrew, do you really think its good fashion to have men’s front and back nether regions blown up like balloons? We don’t think so.

But not surprisingly our good friend Deena, ever the contrarian, is calling Andrew’s enhanced undies, the “world’s best enhanced underwear for men”. Heh!