Edita Bente Ryanair Stewardess Slash Model. Look who’s got herself a lucrative (but, we must add, risky) sideline after she’s done with her day job as a Ryanair stewardess? It’s Edita Schindlerova also known as Edita Bente. She’s an adult film star or something.

And what does Ryanair think about that? Here’s what a spokesperson said following this revelation: “What people do before or after they work for us is their business.”

We agree. And it’s not like there’s something wrong with what Edita is doing. In fact, we find her sideline to be much more noble and much more important than, say, the job of “financial analysts” who drove the whole world into a ditch. 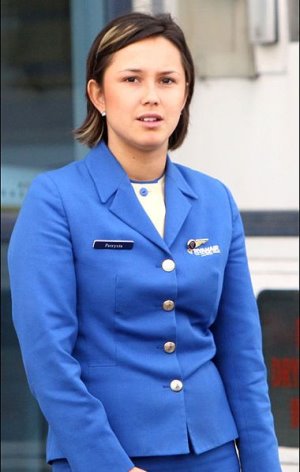 UPDATE: Is Ryanair Chief Executive Michael O’Leary a “fan” of Edita Schindlerova? We ask because the CEO we once called our Idiot of the Day for proposing a fee for the use of his airline’s restrooms was photographed posing with the controversial stewardess. Shindlerova reportedly posted the pictures on her Facebook page with a caption that says: “Happy days. I love my job!!!

Yay, for Edita! We’d love our job too if we can pose for pictures with our company’s CEO. We’ve criticized Ryanair for its dickishness but we gotta give the company credit for embracing Edita’s other job. Silly conservative airlines would have fired her for starring in X-rated films but Ryanair actually gave Edita more opportunity to shine. For example she was featured in the 2009 Ryanair calendar:

Way to go, Edita Bente! You sizzle. She was also included in the 2010 Ryanair calendar but we are not going to upload the picture here because its too damn NSFW for this blog. Hehe.

But, as we were saying, we are happy for Edita. We are happy that she is happy at her job. Oh, about the photo of O’Leary and Edita and, we presume, some other airline crew, here’s what a spokesperson said about that: “Michael O’Leary recently appeared with cabin crew to present UK disabled children’s charity KIDS with 110,000 euros from the sale of our 2010 charity calendar. Ryanair’s crew have now raised over 300,000 euros for charity in just three years.”

So there you go people, they did it for charity.