Didier Drogba Underwear. Chelsea striker Didier Drogba is following the footsteps of fellow footballers David Beckham and Cristiano Ronaldo as well as tennis great Bjorn Borg. He now has an underwear label named after himself. Apparently, the label is produced in collaboration with French brand, Hom Underwear. Hom is the same brand which gave us this underwear for left-handed men.

What’s that shiny thing on his hands? Is that a ring or is he holding a really shiny ball.

In case you are wondering because Didier is only modeling boxer briefs, the Didier Drogba and Co Underwear also has different styles and cuts such as briefs and boxer shorts. 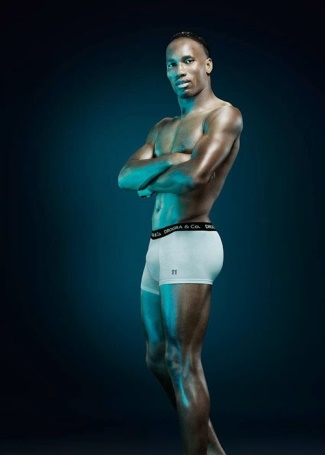 Want to learn more about the Didier Drogban & Co Underwear. Here are some additional info from Hom Underwear (hom.com):

The Didier Drogba & Co. by HOM underwear collection is made from combed cotton and spandex. Thanks to its long fibres, this high-quality cotton is softer and more robust than traditional cotton.

The Didier Drogba & Co. collection of underwear in partnership with HOM includes 6 different pairs of boxer shorts and 3 pairs of briefs. Each of the products features an ultra-soft black microfibre waistband bearing the Drogba & Co logo, with a number 11 at the base of the leg recalling the number that appears on Didier Drogba’s shirt.

Inside the hem of the boxer shorts is a stretch mesh which provides support without putting pressure on the leg. Models that combine the expertise of the HOM brand and the style of Didier Drogba.

How much will you pay for a pair of Didier Drogba underwear? For this sexy briefs (made of 94% cotton and 6% elastane) you gotta pay £16. 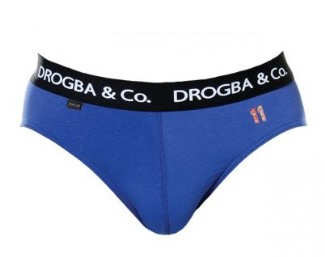 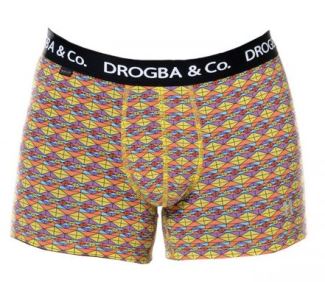