Did you know that Richard Quest – the guy who became the face of CNN when the Malaysian Airlines flight 370 disappeared – is gay? Hah! Apparently, he is. And he’s been out since as far back as 2006 when being gay was not as accepted as it is today.

From a 2006 Guardian article about the new Al Jazeera news network and why it failed to sign up Richard Quest:

Richard Quest of CNN said he turned down an offer on the grounds that being gay and Jewish might not be suitable. There were also problems over where to locate the four main hubs. A decision to base one in New York was vetoed in favour of Washington, and the Chinese government could not guarantee freedom from editorial pressure in Hong Kong so Kuala Lumpur was chosen for Asia. (London and Qatar make up the other two.)

Not surprisingly, Richard’s lady fans were kinda disappointed with the above revelation. Says one commenter on proboards.com:

I just joined the forum to find out more about Richard. And what do you know….the first announcement I read is that he’s GAY!

WHAT A SHOCK FOR ME!!

In my 40 years of life I have never been attracted to a gay man (probably because I knew he was gay!)…NEVER THOUGHT RICHARD COULD BE….so this really through me for a loop. I never even suspected him to be gay! I think he’s sexy, witty, direct, naive and adorable! Not that I think other gay men aren’t are all these things….just not Richard! Boo hoo! There goes all those late night fantasies! ha! Big turn off for me now. I will always love to watch him but was looking forward to one day seeing him with a lovely woman and family. He just doesn’t seem to be gay to me. Not that anything is wrong with being gay but it is quite a disappointment for me personally. Don’t know why it hit me so hard.

Anyone else disapponited? I guess most of you already knew or suspected. I am recently a new fan so don’t know much about him.

Haha. We must say that the above comment, written seven years ago, aptly describes our friend Deena’s reaction when we found out that Richard Quest is gay. Deena was like: “NO! NO! NO! NO! NO! Who will be the father of my baby? Who will teach planes, and flying, and aviation to my son??????” She eventually calmed down when we reminded her that, even if Richard Quest is straight, there is no freakin’ way he would be teaching planes and that kind of stuff to Deena’s imaginary son. Hehe.

Richard Quest Boyfriend: Anyhoo, now that we all know that Richard is a friend of Dorothy, the questions that everybody are asking now go, “Who is his boyfriend? Is he dating anyone? Does Richard Quest have a husband?”

Well, we have the answer for you. Here’s a photo of Richard and his boyfriend! 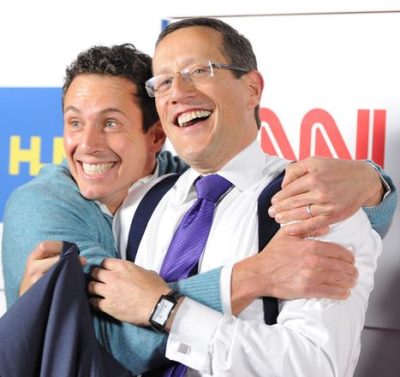 Haha. Sorry, we’re joking. That guy with Richard is actually Chris Cuomo, another CNN journalist. They’re not boyfriends, they’re just colleagues so don’t go around spreading rumors that they are dating. Is that clear?