Daniela Arnaut Cristiano Ronaldo Relationship: Is She His Girlfriend? This Daniela Arnaut girl comes across as a little bit trashy but we give her credit for having a fine taste in men. She is, after all, eyeing that hunk of a man, Cristiano Ronaldo. Who would blame her if she wants to romp in the bedroom with the Portuguese star footballer? Certainly not us. After all, some of us Famewatchers also dream of doing the same thing. Hehehe.

Anyway, Daniela Arnaut is a Bulgarian model and dancer and here’s what she says of Cristiano [according to the British tabloid, The Sun]: “He is sexy, with a fantastic future ahead of him, and millions of women are crazy about him. I would certainly give him something to wink about.”

What do you think of Daniela Arnaut’s chances of boinking Ronaldo? Do you think he’ll pay her any attention? Hey, Daniela, if you ever get what you’re wishing for, be sure you make a video of your bedroom “calisthenics”, okay? We’d like to see whatever it is you do that will make Cristiano “wink”! 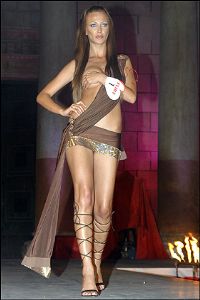 By the way, Daniela appears to have a history of going after hunky footballers. In another story reported by The Sun last March 2008, the Bulgarian beauty claimed that she had a secret affair with Dimitar Berbatov, a Bulgarian footballer (who’s reportedly worth £27million according to the tabloid). It was a secret affair because she had a boyfriend at that time while Dimitar, in turn, had a fiancee.

Dimitar has refused to comment on Daniela’s story so we don’t know whether she’s telling the truth or whether she’s making up stories to land in the papers.

Anyhoo, according to the dancer/model, Dimitar dumped her when she insisted that he substitute her for his girlfriend. So instead of dumping her fiancee, Dimitar called it quits with Daniela instead. We guess that’s what they call poetic justice?

Here’s what Daniela said about her ex-lover: “I was in love with him. He made me feel like a princess. He?s well mannered and a real gentleman. We had a unique relationship. Then he cut off contact without any reason. It was really hard for me.”

Here are some model photos of Daniela Arnaut. If you were Ronaldo, are these photos saucy enough such that you’d be enticed you to go to bed with this Bulgarian babe? Are her weird lips a turn-on or a turn-off?