Guess who may be about to hit it big on the American small screen? It’s American-born Hong Kong actor Daniel Wu who will be the lead star in the upcoming AMC TV series Into the Badlands. If the show becomes a ratings hit, expect Daniel’s Hollywood star to rise higher than where it is now.

So far, the reviews are mixed. Deadline’s Dominic Patten is love, love, loving the show:

Well, you’re in for a treat that night with the Daniel Wu-led martial arts series from Alfred Gough and Miles Millar. Into The Badlands, as my video review above says, is a smoldering, serpentine and supremely stylized series that does the legacy of Bruce Lee proud.

On the other hand, the AVClub reviewer gave it a “C” and called it intermittently entertaining but mostly dull and overwrought.

Well, we gotta first watch the show ourselves to see whether it is good or bad.

Apparently, although he was involved in the production, Daniel didn’t think he’d be playing the lead role. From his interview with threeifbyspace.net:

I really didn’t think about playing the lead at the beginning. I started out as the executive producer developing a project for AMC. That was exciting on its own. And then when we went through the audition process it became clear that I was going to be playing the lead role because it didn’t start off that way. In my mind I thought we would get someone in their late 20s or early 30s because physically its a very demanding role.

Is it a groundbreaking role for Asians in Hollywood? Here’s what he thinks:

We sure are hoping that Into the Badlands will be successful and that it will be renewed!

Daniel Wu Shirtless. We know you fellow Famewatchers are fans of shirtless celebrities so here’s a Daniel Wu shirtless photo taken when he was younger: 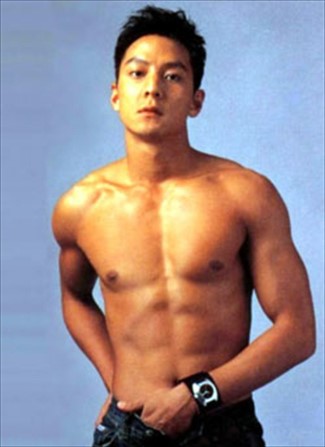 Will Daniel go shirtless in Into the Badlands? We sure hope so. For the meantime, here’s a still pic of our hero from the set of the show: 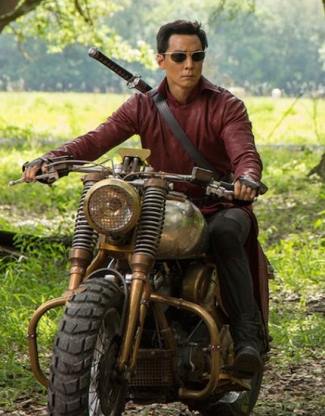 Daniel Wu Gay or Straight? Is Daniel Wu gay or straight? He is straight and married to model/actress/veejay Lisa Selesner (aka Lisa S.). They have a two-year old daughter named Raven. Here’s a pic of the happy family: 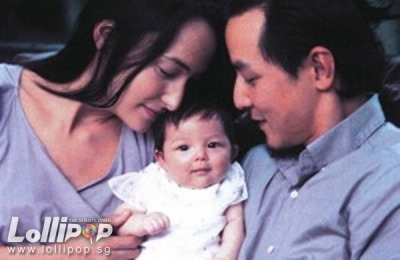 Although he is straight, Daniel played the role of a hunky gay Hong Kong policeman in the movie Bishonen where he went a-kissy-kissy with actor Stephen Fung. Check ’em out getting intimate: 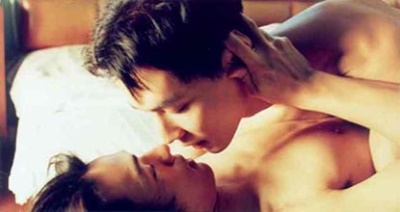 Bishonen was released in 1998 which is seven years before Hollywood produced Brokeback Mountain. Who says Hong Kong is conservative, huh?

Daniel Wu Underwear? Oh my! Check out this photo we found on the internet archives. It’s a younger Daniel Wu looking cool in his black leather underwear. Or is that short shorts?

This gives us the excuse to encourage you to visit our posts on male celebrity leather underwear. Hehe.

Let’s end this post with this fabulous photo of a shirtless Daniel Wu.