Cristiano Ronaldo Plastic Surgery? We are a little skeptical about this news report back in 2009 stating that Cristiano Ronaldo had a secret liposuction. Really? Why would an active athlete who runs around and kicks balls for a living need a liposuction?

Does he not burn enough calories with all the physical stuff he’s doing? 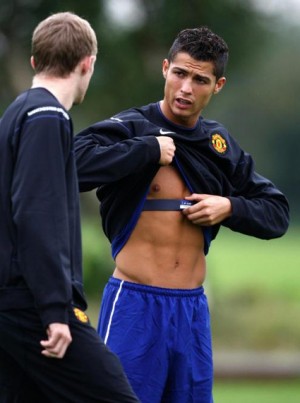 But here’s the report from a Chinese website, People’s Daily Online: “One day after the surgery on his left hand to correct two broken bones, Ronaldo’s secret liposuction was unveiled on Thursday by multiple sources. The entire medical staff, administration and players alike from the Corinthians soccer club were oriented to avoid the subject, as the world renowned player had hoped that the secret surgery would go unnoticed. Taking advantage of the down time due to his shattered ring finger and middle finger in his left hand, the player decided to take a two-in-one operation. However, his secret was discovered by the local media.”

And then the local media told the story to the rest of the world.

The Peoples’ Daily adds: “Corinthians goalkeeper Felipe was the only player to offer an interview regarding the topic. The goalie did not confirm nor deny the liposuction. ‘If Ronaldo did have liposuction, he is going to fly. It will only be good for the team. People have constantly been grinding him, but he continues to score goals. If he really went through a liposuction, he will be thinner and cause more of a headache for other teams,’ declared Felipe.”

What do you think of this secret Cristiano Ronaldo plastic surgery news report? Do you think it is accurate?

…..
UPDATE (14 November 2019): More than nine years later, we are updating this post to answer the question above which we wrote back when we know very little about Cristiano Ronaldo.

A very helpful reader named Joker, who was obviously bothered by our cluelessness, wrote to clarify what the story is really about.

Here’s what he wrote: “LOL I think they are talking about ronaldo fenomeno(phenom) who plays for corinthians…not cristiano ronaldo(LOL)……the other ronaldo used to be the worlds best player during his time(hence the name ‘fenomeno’) but now that he is old he let himself go and is kind of fat and would need liposuction I guess…….if he does get back to full fitness this way then God help the other teams, cuz he was unstoppable…..and btw, c.ronaldo is soo fit that liposuction would probably kill him.”