Neil Patrick Harris Plastic Surgery: The guys at tmz.com are running a “Good Genes or Good Docs” poll on Neil Patrick Harris. Basically, they are asking their readers whether the actor formerly known as Doogie Howser looks the way he looks now because of his genes or whether he is surgically enhanced with the help of a good doctor.

Not surprisingly, considering the fact that he looks exactly what a man of his age should look like, those who say that NPH did not have plastic surgery and that he simply has good genes (91%) far outnumber those who say that he went under the knife to improve his looks (9%).

By his own admission however, NPH actually did undergo a surgical procedure to make himself more aesthetically pleasing. No he didn’t have a nose job, or a botox injection, or a hair surgery, or a penile implant, or whatever it is plastic surgeons do to remove your facial wrinkles.

END_OF_DOCUMENT_TOKEN_TO_BE_REPLACED

Botox For Men. It is the dawn of the new age and its time for you to learn a new word. That word is Brotox which is, apparently, the “cool” word to use when you are talking about botox for men. Years ago, when we began posting about this topic, lots of people gave a side eye to men who go for “botoxing”. These days, it has gained acceptance and there is no doubt that more and more guys will get themselves injected with botulinum toxin to drive the wrinkles away.

It is Flashback Sunday so check out the following posts we wrote about back in 2009 about famous male celebrities and their botox adventures:

…..
Mark Spitz is a Botox For Men Endorser (13 November 2009). Today in celebrity botox news, we bring you a photo of Olympic swimming great Mark Spitz as he gets his face treated with botox. Apparently, Mark is a celebrity endorser for Botox Cosmetic.

END_OF_DOCUMENT_TOKEN_TO_BE_REPLACED

Of course, we also like to check out if there are hotties we’d be ogling at aside from Nam Vo. Haha. And we are happy to note that we found a guy candy in the person of British contestant Kyle Christie who is returning for his sixth season of The Challenge.

END_OF_DOCUMENT_TOKEN_TO_BE_REPLACED

Jake Gyllenhaal Plastic Surgery: Nose Lift or Rhinoplasty? Did Jake Gyllenhaal have some cosmetic surgery? These are photos from another site which speculates that Jake may have had a nose job or rhinoplasty because his nose looks “less big” than in the past. We don’t know about you but could this “less big” thing be the simple effect of the fact that he’s older now? 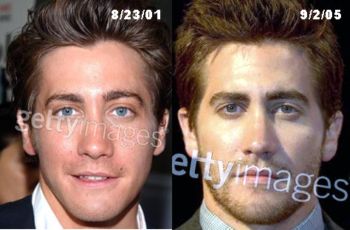 What do you think, Famewatchers? Are these photos enough and sufficient evidence for Famewatching busybodies like us to conclude that our Jake’s got him some nose lift? Or is it a case of a man simply growing up and, as we very well know, there is always a change in one’s looks when a person grows older.

END_OF_DOCUMENT_TOKEN_TO_BE_REPLACED

Louis Walsh Hair Transplant. Does Louis Walsh do whatever Simon Cowell tells him to do? We remember blogging back in 2009 about Louis deciding to undergo a plastic surgery procedure after Simon suggested it. Here’s what we said back then about the matter:

If you are a fan of the “natural look” (a-la Elle Macpherson), then you’ve got another reason to hate Simon Cowell. Apparently, Simon has convinced his fellow X-Factor judge, Louis Walsh, to go under the knife.

END_OF_DOCUMENT_TOKEN_TO_BE_REPLACED

Dolph Lundgren Plastic Surgery? Young and Old Photos. Did Dolph Lundgren undergo plastic surgery to maintain his youthful looks? Or did he find Ponce de Leon’s legendary Fountain of Youth? Or did he sign a pact with the devil exchanging his soul for eternal youthfulness?

Oh wait, maybe he went through one of those controversial stem cell therapy which is now becoming a cure-all for any human health condition like old age (if old age is a health condition, that is).

Anyhoo, check out these photos of Dolph we grabbed from TMZ. These does make you ask, as TMZ does, whether the 54-year-old Swedish bodybuilder/martial artist/Hollywood actor has good doctors or good genes.