Cleo Anthony Gay or Straight, Shirtless Pics, and Other Stuff. Aside from Jake Choi, another up-and-coming Hollywood star that we here a Famewatcher are crushing on is this gorgeous, gorgeous actor named Cleo Anthony. And, why not, the dude’s got the face of an angel and a body that makes us momentarily forget that we have a boyfriend.

Seriously, check out his fabulous selfies. If these does not make you tingle, then there is something wrong with you. Hehe. Joke. Joke.

For those of you who are not familiar with this hunky hunk of a man, the Bustle has this to say about him last year:

If you think you’ve spotted him around before, it’s entirely possible, since he’s had a bunch of credits already. But, then again, if he’s flown under your radar, that makes sense, too: He’s had a lot of “that guy” roles, or one-off guest spots on television series. Also, it’s hard to see his face in the Seasons of Love trailer, because of all the kissing. (I told you holiday movies do that.)

Chances are, if you see the words “Cleo Anthony,” the word “Divergent” isn’t far behind. Yes, he’s in it, and it’s probably the biggest project he’s been associated with so far. But you saw Divergent, right? Do you remember him in it? His character, “Dauntless Patrol #1,” might have slipped right by you.

A year after the above Bustle writeup, it is safe to say that Cleo has climbed higher the Hollywood ladder. Aside from the already mentioned Transparent, he’s also been cast in the CBS show Extant. He had a more substantive role as a recurring character and appeared in seven of thirteen episodes.

Cleo Anthony Shirtless and Underwear Photos. For those of you looking for Cleo Anthony shirtless pics. 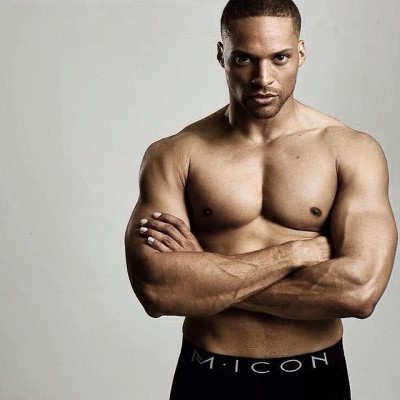 Oh my! He did some underwear modeling too. 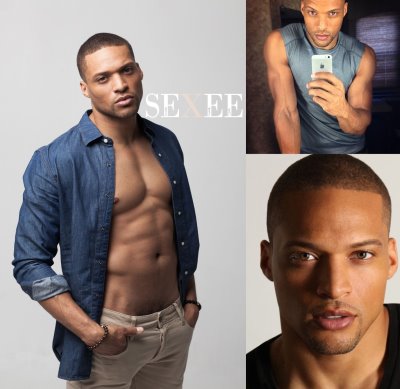 Is Cleo Anthony Gay or Straight? He is straight but he is big enough of a straight guy to be okay with playing a gay role which he did in an episode of the TV series, Hit the Floor.

Check out Cleo doing the horizontal dance with Bernard Curry who played the role of Jesse Reade. The boys sure are totally surprised, no?

Now, now, don’t think of this as proof of an answer to the Is Cleo Anthony Gay question. It’s called acting, you know.

Cleo Anthony Girlfriend? Is he dating anyone at the moment? It does not look like he does cause we can’t find any report of him dating anyone. So, silly girls that we are here at Famewatcher, Deena and yours truly won’t mind calling ourselves Cleo Anthony’s girlfriends. Yeah, we’d rather share him that fight over him, that’s what imaginative friends do. Hehe.