Jillian Michaels Cosmetic Surgery: Nose Job – Before and After Photos. Let’s add Jillian Michaels, badass trainer in The Biggest Loser, to our list of female celebrities with cosmetic surgeries. And we don’t need to speculate on this one because she herself admitted that she had a nose job or rhinoplasty when she was younger.

During an interview with Parade Magazine, she says: “In eighth grade, I weighed 175 pounds and my nose was the size of a softball. Once, I was sitting at lunch and got surrounded by a bunch of kids who let me have it about how ugly I was — my unibrow, the size of my nose, the fat rolling over my jeans. It was pure hell. My mom had to pull me out and put me in another school. I had my nose done. I felt much better about myself. Plastic surgery is a very personal decision.”

Want some before and after photos of Jillian? Here’s our girl when she was 13 years old, years before her rhinoplasty.

END_OF_DOCUMENT_TOKEN_TO_BE_REPLACED

Cameron Diaz Plastic Surgery. Did Cameron Diaz have a nose job or something? Yes she did have a surgical operation done on her nose. But like Daniel Craig who claims that he had some facial surgery done because of some accident, Cameron claims that she had a nose job to fix her “smeller” after breaking it four times: 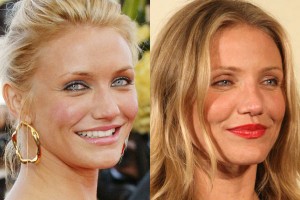 From Marie Claire: “Diaz announces, ‘Shit just finds my face—it’s crazy’. She’s referring to the fact that she finally had her nose fixed, after breaking it four times—most recently with a surfboard, and before that with her own knee. More radical forms of surgery are likely out of the question for her; Diaz is philosophical about what God gave her. ‘I’d love a bigger butt, more meat on my bones,’ she says. ‘I’d love to be more voluptuous. It’s just not my body type’.”