British Girls Bikini Run. What are these British girls in sexy bikini doing? Apparently, they were at the beach to set a world record for the largest number of women wearing bikinis but the bad weather thwarted their plan. It’s understandable if they were disappointed with the turnout. 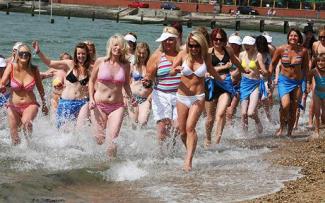 Says one of the participants Debbie Reynolds (via The Telegraph): “It was sunny and everything, so we thought we’d get a good turnout, but it was very sad when we realised that 42 was the grand total. It’s pretty rubbish I must admit. We really need to try harder. It made be feel pretty embarrassed to be British when we can’t even mount a decent challenge.”

Tracy Jones added: “I don’t think the terrible weather yesterday and forecast today helped. It was a beautiful day but I think a lot of people made up their minds yesterday.” 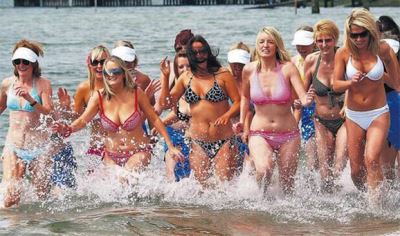 But world record or not, it does look like there’s no stopping these bikini girls from having fun. Props to you ladies, maybe the weather will cooperate the next time you go for the record.

Want more British girls bikini? Check out our other posts below.

British lingerie and catwalk model Abbey Clancy goes swimming in her two-piece bikini swimsuit. Do you like the cut of her bikini? It looks weird, no? But her aviator sunglasses looks awesome.

Myleene Klass, host of NBC’s I’m a Celebrity Get Me Out of Here and underwear model for Marks & Spencer is rocking her leopard print bikini swimsuit. You gotta give the girl props for having a fabulously fit body.

English actress and Louissa Lytton is caught by the paparazzi vacationing with some friends in Dubai. Looks like a good time is being had by all, eh? More beach bikini photos of the Eastender star and her pals below.