Billy Crudup Watchmen Blue Balls. Look who’s talking about his blue balls? It’s Watchmen star Billy Crudup. Men who are having an existential crisis because they don’t have balls as big as Crudup’s will be glad to find out that his peen in the movie is CGI enhanced. Of course they can get jealous of Michael Biserta who’s got the real thing. 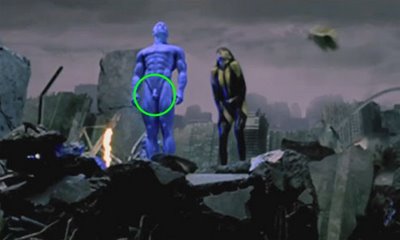 Here’s Billy in an interview with Parade Magazine about Billy’s endowment in the movie:

Q: They say size doesn’t matter, but were you getting teased about how endowed you were?
A: Of course, but I’m not saying how much the computer helped. Actually, I didn’t fully expect the interest that Dr. Manhattan’s genitalia has received. But I understood his motivation for baring it all. Why would the guy with all this power really care about a uniform? He doesn’t need to obey society’s constraints because, if he wanted to, he could destroy society. So I think he kind of feels like, ‘You know what? I enjoy a good breeze on my private parts.’

Q: Not to get too personal, but were you unclothed on the set?
A: I am n*k*d often, but was not naked that I recall during filming. I wore a pair of what were pretty elaborate pajamas and they were studded with about 1,200 blue LED’s so that Dr. Manhattan would glow blue. There were also motion capture electrodes on my body and I had over a hundred on my face. They all sent data into a computer that really created the Dr. Manhattan you see on the screen. My performance was basically just laying the groundwork for the CGI. 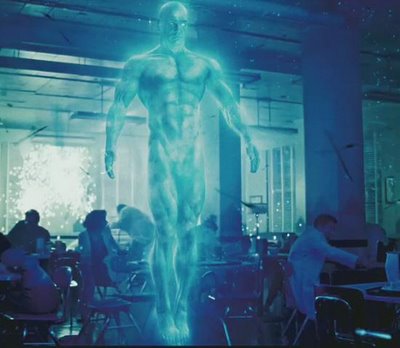 Q: Is that an acting challenge?
A: I guess I just took for granted that when you’re playing a character you have their coat, you have their watch, you have their glasses or whatever. And those are all things that are quite useful in helping your performance. When you take them away you have to pretty much rely on your imagination as your only real resource, and I realized mine had become a little rusty.