Charles Barkley Mug Shot. Say what you will of Charles Barkley, he still has the best bald head in the world. It’s almost as good as Yul Brynner’s. Right? Come on, admit it, you want to rub the basketball star’s shiny head, don’t you? We heard its good luck if you rub a baldie. By the way, this is probably the most innocent-looking mugshot we’ve ever seen since we started paying attention to celebrity mugshots. 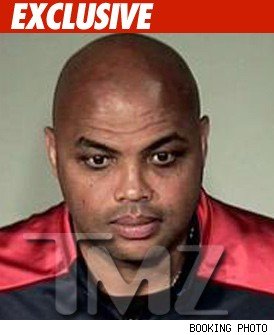 The privilege of being a celebrity jailbird is that you can hold a press conference and CNN will cover you and we will blog about CNN covering your press conference. All is well in the celebrity world, eh? Haha.

Btw, man, Charles has the shiniest bald head we’ve ever seen. Charles, wanna share your secret on how to have a shiny head? [Want more basketball hunks?]

Former basketball star Charles Barkley is going to prison for 10 tens after he pleaded guilty to two counts of driving under the influence, TMZ reports. His jail time, which begins March 21, will be reduced to five days if he completes an alcohol education program which we suggest he does.

Anyhoo, Charles appeared on TNT’s “Inside The NBA” show to talk about his DUI case and this is what he said: “Let me start by saying something. Clearly everybody knows I got a DUI. That’s unacceptable, 100% my fault . . . I screwed up, I made a mistake, I’m sorry, I apologize.