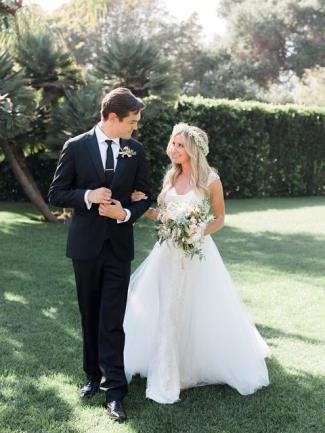 Ashley Tisdale Christopher French Wedding. While we were not looking, High School Musical star Ashley Tisdale grew up and is now married!!! Oh, how time flies. Was it just yesterday when we first saw her as a counter girl on the Disney Channel’s The Suite Life of Zack & Cody? [Our friend Kevin says its been ten years but ten years feel like yesterday.]

Anyhoo, Ashley got hitched to musician boyfriend Christopher French, lead singer of the band Annie Automatic. She shared the good news to her Instagram followers by sharing the photo above with the following caption: “Best day of my life! Introducing Mr and Mrs French Sept 8, 2014”.

Here’s a pic of the bridal entourage which Ashley also shared to her followers: 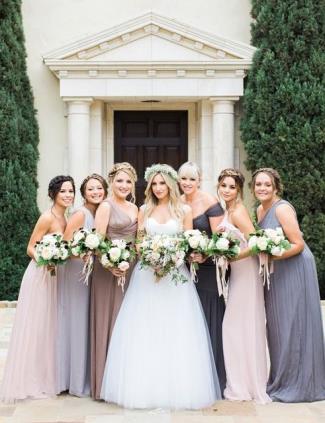 All of us are familiar with Ashley but not a lot of us know Christopher French so here’s an excerpt of an interview he did with adequacy.net from back in 2011. He talks about the early days of Annie Automatic, his tattoos, and celebrities he don’t rub elbows with:

From what I’ve read, you formed Annie Automatic in 2009 and have a 4-member line-up. Who’s in the band? Is it safe to say that you’re the captain at the helm as well as singer, song-writer, and guitarist?

Yes, for the most part. When “Annie” came together, it was a side-project. I was on hiatus from touring with my previous band, and couldn’t stop writing.

I put the Fighting Chances EP together, with David Berg, Mike Benigno and Dylan Howard, in a few weeks – more for fun than anything else. It was a blast.

And people started really picking up on it, so it naturally turned into my main focus. Currently the line-up is Trevor Howard on lead guitar, Andrew Perusi on bass, Sara Sinclair on keys and backing vocals and Dylan Howard on drums. They’re all insanely talented, and we’re all hilarious friends. I handle most of the keys and vocals in the studio (as well as guitars), but Sara has been really helping the sound get to another level live.

I usually come to the table with a song, but allow everyone else to play around with it and we shape and mold it together from there.

This is going back a bit, but did you move to the L.A. area specifically to start a band? If so, why L.A. and not New York or areas like Seattle, Philadelphia, or Athens?


No, actually. You know, I’ve been making music since I was about 11, but I’ve never been too involved with trying to really make money with it – in a lot of ways I still don’t worry about that. It’s just what I do, by nature.

I’m from Northern California originally, near Santa Cruz, so it’s not that far. I moved to Southern Cali for a girl (of course), a long time ago. Needless to say, that didn’t work out, as that sort of thing rarely does when you’re so young and insane. But, it was definitely a turning point in the adventure that is my Life.

Sorry to be a pain and pry, but with the celebrity/entertainment connection, have you been able to party down and meet performers that you normally wouldn’t rub elbows with?

I’ve been around entertainment for years now, and it’s always a little funny meeting and getting to know people who you’ve respected or admired for one reason or another. I see it more for the sociology of it all. Whether I know of someone and their work or not, I’m always interested in how all people are the same, how we all share experiences.

The thing is, we’re all just people living our lives, doing our thing. But, I honestly tend to live in my own little world, and am blissfully unaware of so much. I rarely recognize people. Living in LA, that ignorance is an advantage, for sure.

You’ve got some way rad tattoos on your arms, specifically on the side of your left arm. Who inked you and what do the tattoos signify? Are you planning on getting more?

Ah thanks! Yeah, I get ink done everywhere I can.

I started the cherry blossom tree that now comes down my left arm, in Montreal, Canada. I wanted to get a new branch done in each new country I visited, and it just kept going. It was finished and touched up by my good friend Frank, here in Downtown LA at Onizuka Tattoo in Little Tokyo. I always have reasons behind each tattoo. I believe that if it’s on my body permanently, there better be a reason for it. I will definitely get more.

Okay. Now you know more about Christopher French. Let’s end this post with his shirtless pic, shall we? Haha. 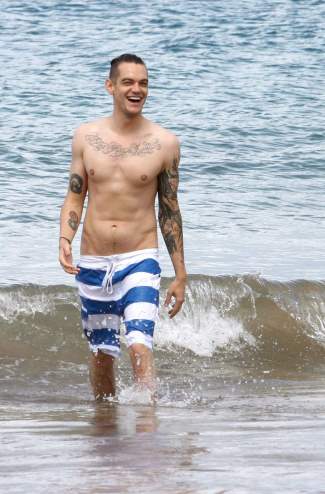