Ansel Elgort Underwear, Speedo, Shirtless Photos. While we were not looking, a young 20-year-old dude named Ansel Elgort has risen up the celebrity chart and has sent our friends Deena and Luka a-twitterin’ with “Ansel fever” after they saw him in the young-adult sci-fi movie, Divergent. They’re also going to line up to watch Ansel’s next movie this weekend, The Fault in Our Stars, along with thousands of girls who found a new Zac Efron/Rob Pattinson in the person of this young hunk.

Although we don’t know a lot about this up-and-coming actor, we must say that we like what we are seeing so far. Good lookin? Check! Can act? Check! (We’re taking D&L’s word because we still have to watch any of his movies.) Likes to take off his shirt? Check! Gay friendly? Check!

So far, there’s nothing to dislike about this guy. And there’s a lot of things to like about him. You know, like these shirtless photos. Hehe.

Above pic is courtesy of Flaunt Magazine. Next pic below is from his 2012 calendar project which raised funds for his high school (or charity, we’re not sure).

Is Ansel Elgort Gay? As is his wont, our friend Kevin would like to know whether Ansel is gay. Is he? Sorry Kevin, the answer will not be to your liking. The Divergent actor is as straight as they come and reportedly has a girlfriend. But, like his fellow millenial actors, the up-and-comer is gay-supportive and gay-friendly. [Update: In an interview with Flaunt Magazine, Ansel says he’d go gay for Tom Hardy. Who wouldn’t? As we very well know here in Famewatcher, Tom is hawt, hawt, hawt!!!!] 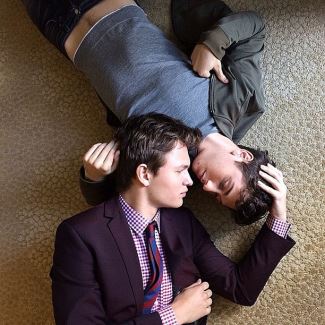 For the backstory regarding the pic above, here’s newnownext.com: “Elgort and co-star Nat Wolff feel our pain, and decided to give gay fans a reason to watch the movie: The guys posed for a same-sex update to the film’s ubiquitous poster. Elgort posted this version on Instagram over the weekend, writing: ‘Love is blind. #tfios @natandalex’.”

Ansel Elgort Underwear: Boxers or Briefs? Pics of Ansel in his squarecut swimsuit. [Or is it a pair of boxer briefs?]

Who says you can’t do a sideways pushup in your tight undies? Not our Ansel!

Ansel Elgort Speedo Photos (2016 Update). Some photos of Ansel in swimsuits. Any guess on where he’s enjoying his vacation. Our guess would be Thailand. 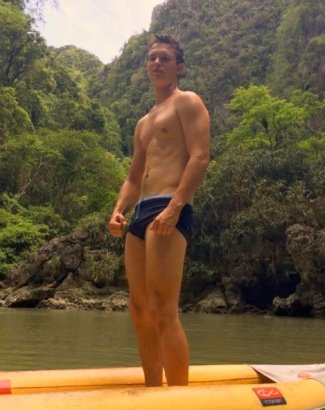 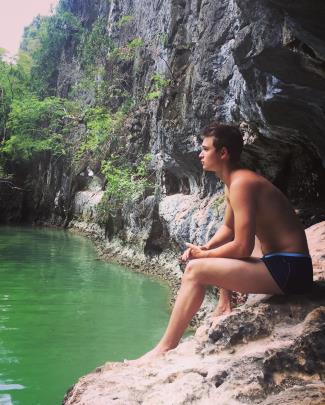 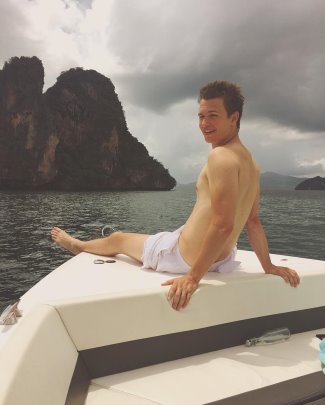