Is Shepard Smith aka The Only Sane Person on Fox News a gay man? Hmmm, the guys of Out Magazine thinks he is because they keep naming him to their list of the Top 50 Most Powerful Gay People. They first added Shep to the list in 2011 and he is again on the 2013 Power List with a #8 ranking. 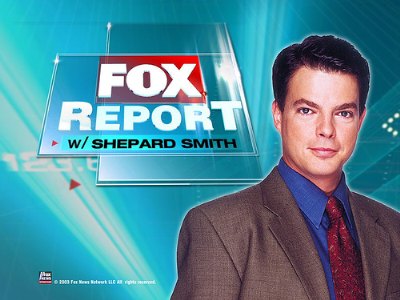 Here’s what Out Magazine editors say about the Fox anchor:

A lone, trusted voice in a sea of just plain awful, Smith has steered his nightly series, Fox Report With Shepard Smith, to high ratings and a solid reputation that even its association with Fox News just can’t sully. With a viewership that beats out both competing networks and the rest of his own network’s lineup, it’s safe to say the Mississippi native isn’t going anywhere anytime soon.

Another person who thinks Shep is a friend of Dorothy is the crazy old coot that is Cliff Kincaid, head of the anti-gay conservative group America’s Survival, Inc. Here’s what Kincaid says about the Fox media star’s orientation (via rawstory.com):

“I don’t know about you, but if I was listed as one of the most powerful homosexuals in the media, I would first demand a retraction and probably sue for defamation and collect a lot of money. Shepherd Smith, according to my information, has never asked that that be taken down. He’s been one of Out magazines most powerful media homosexuals for several years in a row.”

Kincaid also noted that Smith had described “Chick-fil-A Appreciation Day” as a “National Day of Intolerance.”

Meanwhile, Kevin Naff, editor of the LGBT magazine Washington Blade revealed back in 2005 that Smith propositioned him (via pamspaulding.com):

Smith once chatted me up in a New York City gay piano bar, bought me drinks, and invited me back to his place. When I declined, he asked me to dinner the next night, another invitation I politely refused. We sat at the bar chatting and drinking martinis until 3 a.m., our conversation interrupted only when he paused to belt out the lyrics to whatever showtune was being performed.

So if he is gay, does he have a boyfriend? Some people (hint: our friend Deena) want him to hook up with Anderson Cooper but we’re afraid that that ain’t gonna happen since The Coop is in a loving, happy relationship with that Benjamin Maisani dude. 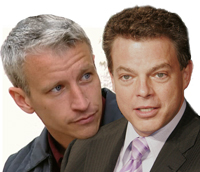 Now, if you are into blind items, you might have come across this post on blindgossip.com published in January this year:

The Anchor And The CEO: He is one of the biggest anchors on a television news show and is instantly recognizable to anyone who watches television. He has never come out as a gay man, and likely will not as long as he has his job.

His current boyfriend is also a big shot. He is the President and CEO of a huge, well-known company in the transportation industry.

Employees tell us that the anchor and CEO frequently hook up at company headquarters. The two men shake hands as if they are meeting for business reasons, and then adjourn into a private office… for some very colorful private time. The encounters usually last for half an hour or so, and happen at least once a week.

While a little afternoon delight is not that uncommon, it was surprising to hear that these two enjoy each other’s company so frequently, and in such a way that has set tongues wagging at headquarters.

The identity of the parties would also come as a surprise to many, given that both present as very button-down, uber-conservative types… while quietly living their lives as gay men.

A commenter named our Shep as the subject of this blind. Says commenter Pink Flamingo, “I once dated a man who went to Jounalism School at Ole Miss with Shepard Smith and he told me that Shep (as he called him) is definitely gay.”

Now, we must point out that these are all conjecture and it is likely that The Shep is a big ol’ hetero. After all, he was once married to Virginia Donald from 1987 to 1993.

Anyhoo, whether he is gay or straight, we will keep on liking Shep for his work on Fox.