Muhammad Ponari: The Child Miracle Healer? Villagers from a tiny village in Indonesia are hailing nine year old boy Mohammad Ponari as a miracle healer. He has reportedly healed a number of people including one who gained the ability to speak. 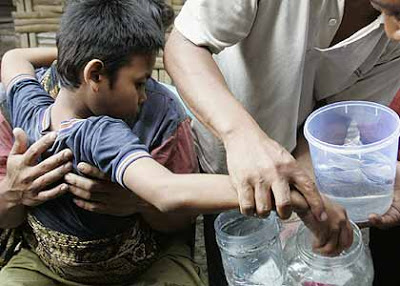 Here are stories about this boy from around the internet:

From theage.com: MOHAMMAD Ponari was, until last month, a typical kid in the impoverished East Java village of Balongsari. Then, quite literally, lightning struck.

The nine-year-old, who had been playing in the rain in his front yard, was hit by the thunderbolt but, to the astonishment of his young friends, he was unharmed.

All the more bizarre, according to an account by his village chief and his family, when he came to, he found a stone the size of an egg on his head, and was convinced he possessed healing powers.

A boy next door with a fever was his first patient. The stone was placed in a glass of water and the boy drank deeply. His fever vanished.

Then another neighbour approached him, a woman in her 30s who had suffered from a depressive condition for 15 years. She, too, was healed.

“My arm was sprained. The water touched by stone was given to me and I applied the water to my sprained arm. Suddenly, I was OK again,” she said.

The district police commissioner, Sutikno, a devout Muslim who will be making the Haj pilgrimage to Mecca this year, told of his experience.

“I was inside the house talking to the boy and his family. Together with me in the house was a boy of his age who had not spoken for five years,” he said.

“Ponari shook him. The boy reacted and they started fighting, like wrestling and pulling each other’s hair. Then, a few moments after the fighting, the boy started to talk.”

The tales of miraculous healings spread. Within a week of the lightning strike, hundreds of villagers were lining up outside Ponari’s modest home.

A week later, the ailing, the lame and the curious were coming from as far afield as Malaysia. Thousands queued each day in lines stretching for kilometres, carrying plastic bags of water ready to be transformed into an elixir by the magical stone.

Stampedes erupted on at least three occasions, resulting in the deaths of three people and injuries to dozens more.

The extraordinary scenes in Balongsari highlight the strong grip that mysticism retains over many Indonesians, and Javanese in particular.

While Islam is the most popular religion in Indonesia, it is infused with supernatural beliefs that have been part of Indonesian culture since prehistory, incorporating elements of animism, Buddhism and Hinduism, religions that have at one time or another dominated Java.

Commonly known as dukuns, these shamans and healers can be found in most villages and city shantytowns. Many double as Islamic clerics, and offer services ranging from alternative medical treatments, to guidance in romantic affairs and fortune-telling.

Dukun santet are the exponents of black magic, sorcerers who cast spells. In 1998, 200 supposed dukun santet were massacred in East Java in a mysterious series of killings that have never been solved.

Politicians frequently seek the guidance of dukuns, most famously the former dictator Suharto. Magazines proliferate tracking the latest development in the paranormal world, packed with ads from dukuns spruiking their other-worldy abilities.

As for Ponari, he stopped administering his miracle cures this week after tending to tens of thousands of patients. The public disorder forced police to remove the boy to an undisclosed location.

Even so, as much as 1 billion rupiah ($A120,000) has been raised through a charity box outside his home. This, many adherents to mysticism believe, was poor form indeed. Dukuns are not supposed to profit from their activities.

According to village chief Retno, Ponari himself said he had been “scolded” by the stone for accepting cash. “He said he felt that his whole body was whipped,” she said.

Ponari himself has now fallen ill, gripped by fever and nausea. Exhaustion perhaps. Or a sign of displeasure from the spirit world?

From The Sun:
A BOY of nine is being hailed as a “Messiah” after allegedly performing miracle healings.

Villagers claim Mohammad Ponari has cured raging fevers and debilitating illnesses — and even made a mute boy talk again.

At least 5,000 pilgrims a day now flock to be treated with Mohammad’s tonic — made by dipping a “magic stone” in water.

But Muslim leaders in Indonesia want to shut his “clinic” after four people died in a stampede.

The lad is said to have discovered his gift after he was hit by lightning.

He became convinced that an egg-shaped stone he found next to him had healing powers.

Police chief Sutikno told how he saw Mohammad cure the mute boy in Balongsari, East Java, saying: “Ponari shook him and they started fighting, then he began to talk.”