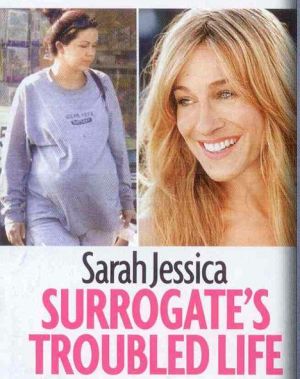 Michelle is expected to give birth sometime in July.

Oh my. Michelle Ross, the 26-year-old woman who is reportedly acting as a surrogate for the twin baby girls of Sarah Jessica Parker and Matthew Broderick is being criticized by her ex-husband for ignoring her own son.

‘Michelle has kids for other people, but she hardly ever sees her own son,’ Joseph Erker told Star magazine.

Joseph and Michelle divorced in 2006 and the former looked after Brayden their four-year-old son at their home in Martins Ferry, Ohio.

Although he’s critical of Michelle for ignoring their child, Joseph believes that Michelle is serving as a surrogate for the right reasons: “She said she wanted to become a surrogate to help people who couldn’t have children of their own.”

What do you think of surrogacy? Would you ever act as a surrogate for someone else? Can you see yourself being a surrogate for a friend or a family member? What about a complete stranger?

All this surrogacy stuff reminds us of Phoebe Buffay (acted by the great Lisa Kudrow) and how she became a surrogate for his brother and his wife who had a difficulty conceiving. It was a great sacrifice on Phoebe’s part because she helped give life to the children of a couple who cannot otherwise have children.

Do you think Phoebe can be a surrogate for a celebrity like Sarah Jessica Parker?

We ask all these silly questions because we obviously don’t have the answer. And we think there is no right or wrong answer too. It’s a question that each of us will have to answer on our own when we do find ourselves confronting the issue.