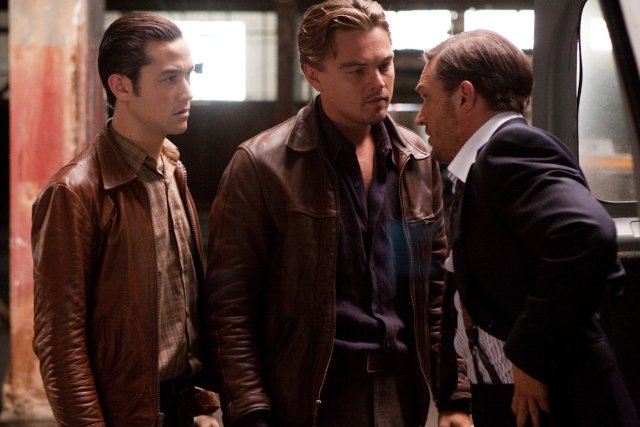 We were seating at the edge of our seat and didn’t want it to end. You should go watch it yourself if you want your faith in cinema – which, lately, has been producing silly sequels and stupid remakes and prequels and remakes of remakes – restored.

Now, if you’ve been searching for the internets on where you can buy the Inception leather jackets of Leo and Joseph, we’re afraid you can’t do that. Why? Because said leather jackets were specifically made for the movie and didn’t come from a designer or a particular fashion house.
We here at Famewatcher have been debating where the Inception jackets are from and who designed them: Deena thinks they’re Aero leather while Kevin thinks they’re made by Belstaff. The others have other wild guesses as well. 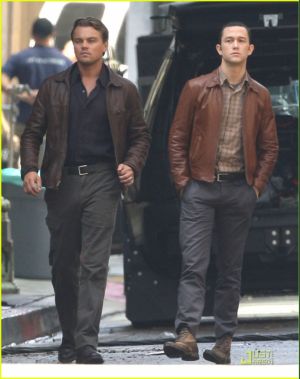 It turns out that the Inception leather jacket worn by Leo or JGL, as we already mentioned, were actually custom made for the movie by the movie’s Costume Designer, Jeffrey Kurland. Here’s what he revealed in an interview with Clothes on Film:

Clothes on Film, Chris: Were the leather jackets worn by Leonardo DiCaprio as Cobb and Joseph Gordon-Levitt as Arthur custom designed by yourself?

Jeffrey Kurland: I designed and had constructed the leather jackets worn in the kidnapping scene. The colors, styles and textures of the jackets were specific to the characters needs and to that of the storyline.

So there you have it, leather-watchers! The question on who designed the Inception leather jackets been settled. Unfortunately, as we already stated, because they’re specifically made for the movie, you can’t find similar jackets made by the same designer elsewhere.

But the folks of What Comes Around Goes Around (Remember them? They’re the ones who make clothes based on movie costumes) might be able to make replicas for you.