Handsome German Men: Football Stars Edition (posted 30 June 2016, updated). You loved our post on hot German guys so we decided to do a Part II. This time, however, let’s focus our attention to the gorgeousness of German football stars.

Germany, for those of you not into football, is the current FIFA World Cup Champion. It beat Portugal, Ghana, Algeria, France, Brazil, and Argentina en route to the 2014 FIFA World Cup title. But we know you are more interested in the guys rather than their game so let’s begin our list of 11 gorgeous German hunks.

Let’s begin with striker 1) Mike Hanke whose photo below prompted us to do this post. Mike currently plays for the Guizhou Renhe F.C. He also played for the German national team from 2005 to 2007. 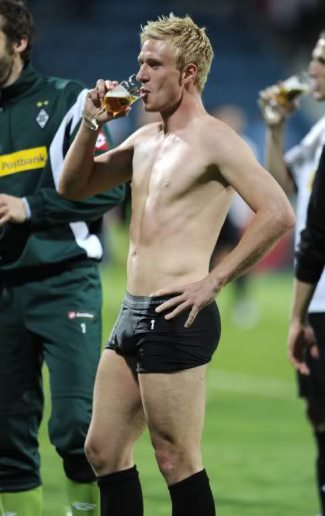 Twenty-four year old midfielder 2) Toni Kroos currently plays for Real Madrid. He was a member of the German national team which nabbed the 2014 FIFA Champions trophy in Rio de Janeiro.

Heres a shirtless 3) Sami Khedira on the pages of GQ Magazine. A defensive midfielder, 27-year-old Sami plays for Real Madrid as well as the German national team.

Recently, 4) Bastian Schweinsteiger was named as the captain of the German national team according to Deutsche Welle. He currently plays for Bayern Munich (position: midfielder) and like the guys above, was a member of 2014 German national team which won the World Cup.

Fifth in our list of handsome German men is 5) Alexander Meier who’s looking good in his Speedo swimsuit. Alexander is an attacking midfielder for the Eintracht Frankfurt.

Footballer slash Hugo Boss male model 6) Mario Gomez is our imaginary German husband. Haha. The 29-year-old striker from Riedlingen, West Germany currently plays for ACF Fiorentina and has been a member of Team Germany since 2007 (1999 if you include his junior years). He is sexiness personified, ain’t he?

At 22 years old, 7) Mario Gotze is one of the younger ones of this group. The Memmingen native presently plays for Bayern Munich. He joined the national team in 2010.

Our eighth handsome German men is 8) Leon Goretzka the Benjamin of this group; he’s only 19 years old. He’s a midfielder for FC Schalke 04 and, this year, was a member of the German national team preliminary squad.

If we are ever going to divorce our imaginary husband Mario Gomez, we would do it for attacking midfielder 9) Lewis Holtby. And, why not? He’s cute, he’s got abs to die-for, and he seems to love fun, fun, and fun!!!

The tenth guy on our list 10) Mats Hummels caught our attention when he modeled for Head and Shoulders shampoo. Cool, huh? Mats is the centre back for Borussia Dortmund and, since 2010, is a member of the German national football team.

Last but certainly not the least in our list is 11) Shkodran Mustafi, a 22 year old centre back from Bad Hersfeld. He currently plays for Valencia CF. He made his international debut as a member of Team Germany in the 2014 Rio de Janeiro World Cup.

That’s it for now, fellow GuyWatchers!