Michelle Rodriguez: Gorgeous beauty Michelle Rodriguez recently revealed in an interview with Entertainment Weekly that she plays for both teams in the sexual divide so we decided to come up with a list of female bisexual celebrities in Hollywood and beyond.

But first, here’s what the Fast and Furious star said about her orientation (via ew.com): “I’ve gone both ways. I do as I please. I am too f—ing curious to sit here and not try when I can. Men are intriguing. So are chicks.”

Evan Rachel Wood: For her part, Golden Globe/Emmy-nominated actress Evan Rachel Wood revealed that she’s a bi last August 2012. From her Twitter account: “I myself am bisexual and have always ‘joked’ about miley giving me gay vibes. Not a bad thing! Just an observation.”

Wood is currently married to English actor Jamie Bell with whom she has a son.

Lady Gaga: In a 2009 interview with Rolling Stone magazine, music superstar Lady Gaga revealed that she is bi and that her hit song Poker Face is about her fantasizing about a woman while being with a man.

In a recent interview with Andy Cohen on Bravo’s Watch What Happens Live, Lady Gaga had this to say: “I like girls. I’ve said that [before]. I know people think I just say things to be shocking, but I actually do like p—y. It just depends on whose p—y it is. It’s similar to how I feel about guys. I like them because I find lesbians to be way more daring than straight men, when it comes to coming on to you. And I really like that. And it wasn’t until I found a guy that could come onto me as strong as a lesbian that I fell in love.”

The Born This Way singer is currently in a relationship with the gorgeous Taylor Kinney. Update: They’ve broken up but you can see more of Lady Gaga’s ex in our earlier post about him: Taylor Kinney’s Underwear.

Kyrsten Sinema, the incumbent Congresswoman for Arizona’s 9th District is the first openly bisexual person to be elected to the U.S. Congress. Among her advocacies, according to the NPR, are women’s rights and same-sex marriage.

JoCasta Zamarripa, Wisconsin State Representative (8th District), came out as bi in 2012. Here’s what she said about the matter (via jsonline.com): “When Ellen (DeGeneres) came out that was when I felt I could write in my journal about it. It’s tough for people to wrap their minds around that, but it is a reality and the truth. It’s part of my life, like being a south sider and the only Hispanic in the Legislature, and I’m happy to share it with my constituents.”

Anderson says she has not discussed her relationships with women before for fear of making a big deal of it. Quote: “If I had thought I was 100% gay, would it have been a different experience for me? Would it have been a bigger deal if shame had been attached to it and all those things that become huge life-altering issues for youngsters in that situation? It’s possible that my attitude around it came, on some level, from knowing that I still liked boys.”

Cynthia Nixon: The wikipedia entry on the Sex and the City star has this to say about her relationships.

From 1988 to 2003, Nixon was in a relationship with teacher and photographer Danny Mozes. They have two children together, a daughter born in 1996 and a son born in 2002. In 2004, Nixon began dating education activist Christine Marinoni. Nixon and Marinoni became engaged in April 2009. Marinoni gave birth to a son in 2011.[16] Nixon and Marinoni were married in New York City on May 27, 2012, with Nixon wearing a custom-made, pale green dress by Carolina Herrera. 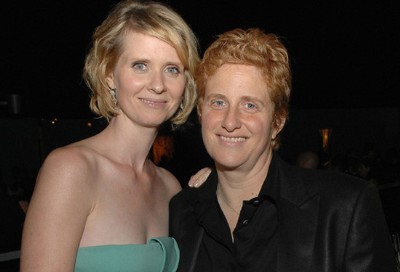 In a statement released to The Advocate, Nixon elaborated on her orientation: “While I don’t often use the word, the technically precise term for my orientation is bisexual. I believe bisexuality is not a choice, it is a fact. What I have ‘chosen’ is to be in a gay relationship. As I said in the Times and will say again here, I do, however, believe that most members of our community — as well as the majority of heterosexuals — cannot and do not choose the gender of the persons with whom they seek to have intimate relationships because, unlike me, they are only attracted to one sex. Our community is not a monolith, thank goodness, any more than America itself is. I look forward to and will continue to work toward the day when America recognizes all of us as full and equal citizens.”

Anna Paquin: The second youngest actor to win an Oscar, Anna Paquin revealed that she is bi when she appeared in public service announcement for wegiveadamn.org.

The Telegraph reports: “Anna Paquin, the star of TV series True Blood, has revealed that she is bisexual. Paquin – who is engaged to her True Blood co-star Stephen Moyer – made the disclosure in a public service announcement video promoting the Give A Damn equal rights campaign. ‘I’m Anna Paquin. I’m bisexual and I give a damn,’ she said to camera during a private taping in Los Angeles.”

Okay, that’s it for now Famewatchers. We will update this post once we come across more female bisexual celebrities.