Dan Boyle Gay? Shirtless Photos of Hockey Hunk. Is hockey player Dan Boyle gay or straight? We ask because, well, you can’t look at that picture of him above wearing a fur coat and not ask the “is he gay” question. Seriously, what is he doing in that photo? Is he modeling the Calvin Klein underwear which is peeking out from his nether regions?

Or is he headlining a pro-fur campaign to piss off PETA? Or maybe that’s a faux-fur he’s wearing so he’s supporting PETA? Or is he simply showing off his sculpted abs? If you know the story behind the photo then do tell us in the comments because inquiring minds would like to know. 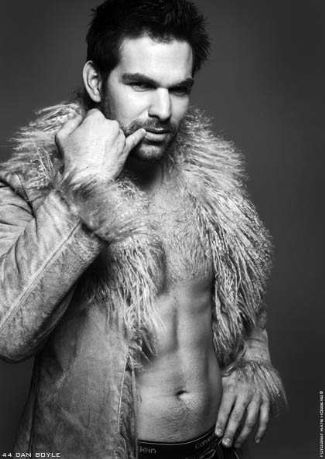 Another pic that makes us go, “hmmmm”, is this photo where our hockey hunk is kinda dressed as a woman. And he’s got a guy with a mustache beside him too. Hehe. 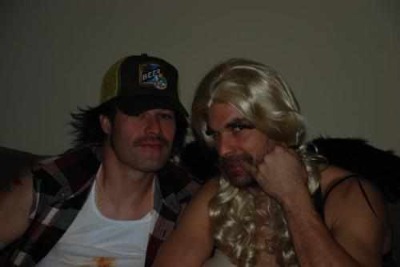 The guy, by the way, is fellow Canadian hockey player Patrick Marleau and the two are in the midst of a Halloween party which explains their looks. Didn’t we tell you that Hockey is So Gay?

Now, to answer the question on whether Dan Boyle is gay or not, the answer is most definitely NOT. He is, in fact, married to a lady named Amber with whom he has two kids. From a 2010 post on the San Jose Sharks website:

Wesley, a slick-skating seven-pound, four-ounce blueliner with tremendous offensive upside, will be available for the National Hockey League Entry Draft in 2028.

The fact that our Danny boy is very much married should not stop you from ogling at him in his underwear. Which is why we are publishing the pic below for those of you looking for Dan in his undies as he plays around with Vincent LeCavalier and Nolan Pratt when they won the Stanley Cup for the Tampa Bay Lightning back in 2004. 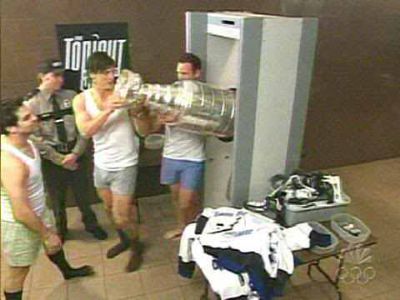 And here’s Dan with Patrick Marleau, Joe Thornton, and Dany Heatley when they bagged the gold medal during the Vancouver 2010 Olympic Games. 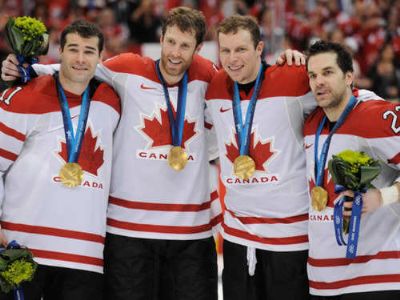