Cody Zeller Shirtless, Height, Shoes, Girlfriend (If Any). Let’s continue blogging about NBA rookies and, this time, let’s check out this year’s #4 draft pick, Cody Zeller. The 21-year-old baller played for Indiana Hoosiers in college but he will now playing with the Charlotte Bobcats. 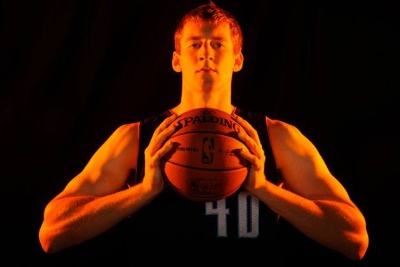 So what are Cody’s strengths and weaknesses as a basketball player? Here are some of the draft reports by basketball experts written prior to the draft.

WEAKNESSES: Has to get stronger, needs to prove he can muscle with bigger players

…..
nbadraft.net (LaMarcus Aldridge):
STRENGTHS: Bigman with an excellent basketball IQ and all around athlete … A gazelle. Runs the floor extremely well for a 7 footer. He’s also has great body control for a center, showing unusual ability to convert plays on the break.

WEAKNESSES: Not a shot blocker or much of a presence on the defensive end. Can be overwhelmed by stronger and more explosive opponents … While very composed, his moves can be too predictable, leading to blocked shots … Unselfish to a fault. May never be a huge scorer in the league.

…..
It would be worth revisiting the above comments a few years from now to see how Cody has worked on his perceived strengths and weaknesses, no? Now, we won’t be Famewatcher if we don’t post a Cody Zeller shirtless photo so here you go: 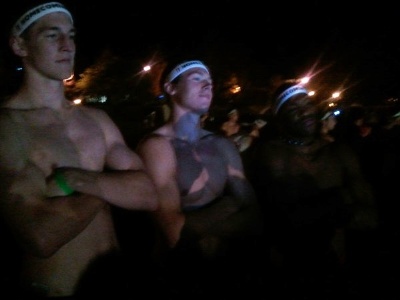 The above pic is from his Twitter account (follow him on Twitter: @CodyZeller) and it is accompanied by the following message which explains what he is doing without his shirt: ” Some harmless freshmen initiation….The nearly naked mile. Don’t worry I had shorts on.”

It would have been more fun for spectators if the “initiatees” (is this even a word?) didn’t have their pants on too, no? Hehehe. 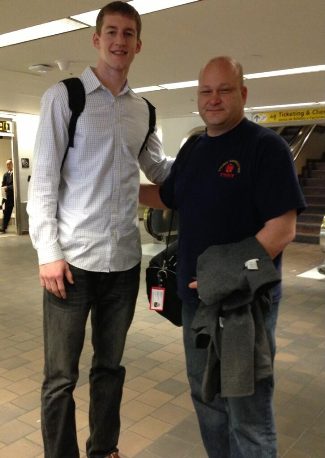 His shoe size? We don’t his exact size but we think its bigger than big :-) 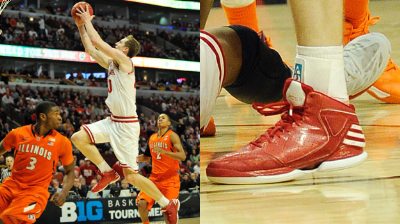 Maybe he found a girlfriend between then and now? If you are in the know, do tell us any Cody girlfriend info in the comments. Tschuz.