Catherine Tate Twig Clark Lovebirds Sitting on a Tree. When we looked at the picture of these two, we thought of including them in our Cougar Watch but, after some digging, we decided not to. Why, you ask? Because it turns out that Catherine Tate is only five years older than her boyfriend Twig Clark. Just a five year gap, that does not make her a cougar at all. 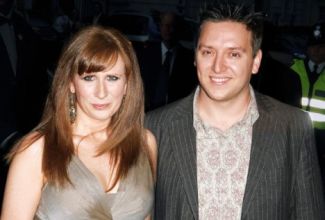 For the record, we believe that a woman must at — the very least — be 12 years older than her cub or boytoy to qualify as a cougar.

Twig is really boyish-looking though so you can’t blame people if they think Catherine is a cougar. Go, cougars! Go, Courteney Cox.

UPDATE: Hah! This post touched a raw nerve for some of you who got back to us with the following comments:

Becka: Are you kidding me!?!??! Catherine Tate is an amazing actress, comedian, and an all around awesome person! I feel so offended that she was even considered as a cougar for cougars are pathetic beings who cannot find love without ruining the life of some young twat. OMG!

(I mean no dis-respect or BIG hard feelings, its just that I’m a big Whovian and Donna Noble was my favorite companion. I just spent around an hr watching her comedy sketches and then later saw this and was like ‘WHOA!” LOL. Like I said.. big fan of Catherine Tate).

Stephanie: I know Catherine aint a cougar…… I know Catherine is happy with her man. And she does not care if he is 5 yrs younger than her. It’s just the press ….. doing their job to harass her…. Like they would do to any other celebrities.