USA Selikon Fake Endorsements. Oh my. Want to know how David Beckham satisfies Victoria? We don’t know how but some audacious (and, we must admit, a little creative) advertising executives in China say they know the secret. Except that they don’t actually know but are only illicitly using Beckham and other famous celebs to sell some Viagra-like sex pills called USA Selikon. From news.com:

SOCCER star David Beckham and actors Sean Connery and Keanu Reeves are being illicitly used to promote a sex drug in an advert being shown on TV stations around China. Footage of Beckham in action and with his wife Victoria is used in the advert for the Viagra-style pills called USA Selikon with Chinese voices dubbed onto the film to show the AC Milan star apparently endorsing the product.

Well, here’s the video version courtesy of accidentalsexiness. So what are our celebrities saying in Chinese? Here’s the translation:

David Beckham: Want to know how I can keep being strong and running on the football field? USA Selikon capsules help me a lot. It’s also the secret weapon with which I can satisfy Victoria.

Keanu Reeves: The feelings after my kidneys got washed by USA Selikon capsules are surprising. And my girlfriends were also surprised. 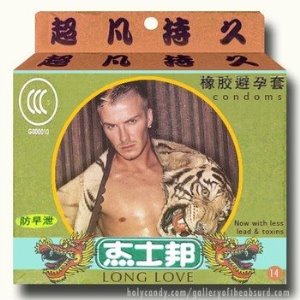 Wow. The Chinese must really really love David Beckham because some advertisers just keep using him, without his permission, as a marketing tool. Here’s an image of David used to sell a condom. According to reports, sales of this brand skyrocketed when David was included in the packet.