Akihiro Gono MMA Fighter: Gay Man or Showman? Eh, you want proof that mixed martial is kinda gay? What about War Machine aka Jon Koppenhaver getting arrested in a gay bar following a brawl? That’s not enough proof for you? Okay, what about the above photo of Japanese MMA fighter Akihiro Gono wearing a shimmering silver dress?

Deadspin says: “That’s Akihiro Gono in the middle there, making his entrance at UFC 94 at the MGM Grand Garden Arena in Las Vegas on Jan. 31. At least in boxing, guys like Oscar De La Hoya dress like this only in private. Surprisingly, Gono’s opponent, Jon Fitch was not intimidated. Gono lost their welterweight bout.” 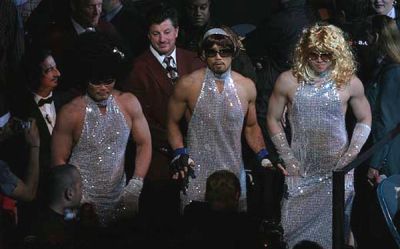 UPDATE, 23 May 2011. Okay, after seeing more of this guy we’ve come to the conclusion that he is more of a showman than a gay man. He’s sort of like former basketball star Dennis Rodman. Oops, that’s probably not a good example because Rodman is either gay or bisexual.

Anyhoo, we love Akihiro’s showmanship. Anyone who wears a wacky afro is, for us, a star! 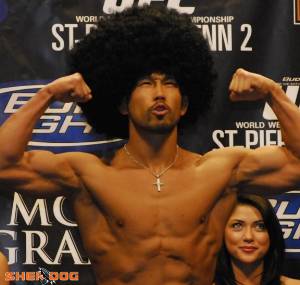 We’re gonna say, “That’s So Gay!” when we saw Akihiro wearing his zebra print underwear (or short shorts) but we think this is part of his showmanship which is cool and which is what makes him popular. After all, we will not be blogging about him if his undies are as generic and unremarkable as those worn by other MMA fighters, right? 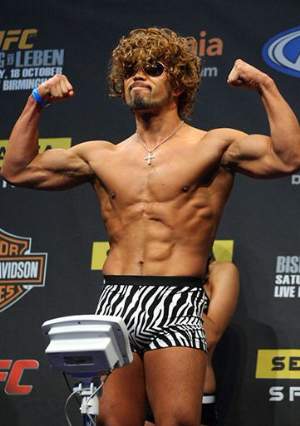 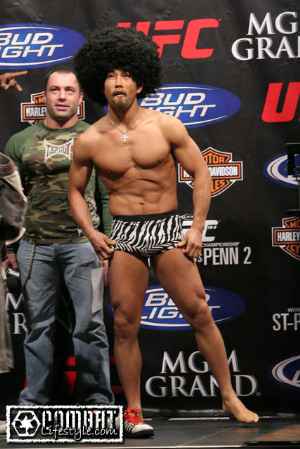 Leopard print fighting shorts? This guy, seen here during his losing fight with Dennis Kang, must have a roomful of animal print outfits, no? 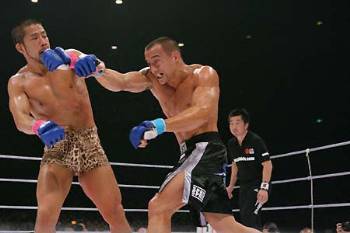 For those of you googling for “Akihiro Gono’s sunglasses“. Unfortunately, we don’t know the brand he’s wearing so we can’t tell you. Maybe its Ray Ban or maybe its a Japanese eyewear brand.

And here’s a hilarious entrance video of Akihiro. This should destroy the misconception that Japanese guys don’t know how to have fun.