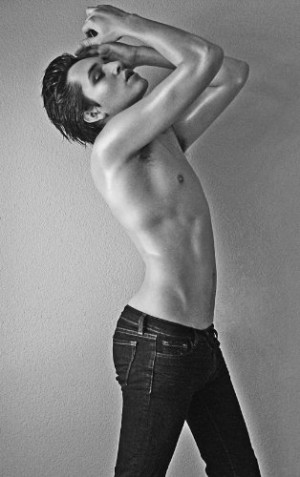 The PR news release about the D&G-Adam Bertrand campaign:

Runway/print supermodel, pop star and actor Adam Bertrand has been confirmed as the new face of high-end fashion brand Dolce & Gabbana. Stefano Gabbana, one of the Italian designer duo, is thrilled that the budding young star has taken part in the campaign for the fashion house, reports Nylon Guys Magazine. “The campaign with Adam is stunning. I can’t say anything about it.

We are at the last shot… Adam is fantastic… We’re very, very tired but very happy as well… To have Adam in our campaign is a dream come true,” Gabbana posted on micro-blogging website Twitter.

The 18-year-old will appear in the label’s autumn/winter 2011 campaign, advertising their menswear collection. The advertisement will be Victorian-themed and was shot in Bath, England, by fashion photographer Stephen Klein, who previously photographed Madonna for Dolce & Gabbana.

A handful of photos for Dolce & Gabbana featuring Bertrand and a group of other male models have already leaked to magazines and the internet, and were met with praise. In the past, Bertrand has campaigned for Burberry, Guess Jeans and Louis Vuitton. He is also set to star in the upcoming film Final Destination 5, and open for Lady GaGa on the San Francisco leg of her Monster Ball tour.