Jeff Gordon Tag Heuer Carrera Watch: NASCAR Champion Spokesmodel. Who is Jeff Gordon? He is the long lost twin of Elijah Woods aka Frodo Baggins. Hehe. Seriously, he does resemble Elijah Woods a little bit, doesn’t he? We think its them piercing sexy expressive eyes. 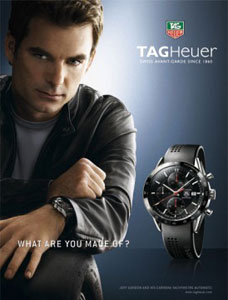 Anyhoo, for those of you who are not into NASCAR racing, let us introduce you to Jeff Gordon via this entry from wikipedia: “Jeffery Michael “Jeff” Gordon (born August 4, 1971) is a professional American race car driver. He is a four-time NASCAR Winston Cup (now Sprint Cup) Series champion, three-time Daytona 500 winner, and driver of the #24 DuPont/Pepsi/United States National Guard Chevrolet Impala.”

Now, that’s quite an achievement isn’t it. But, wait, there’s more…

Apparently, our Elijah Woods lookalike is the the first NASCAR driver to reach “$100 Million in winnings for the Cup series in 2009”.  He is also recognized as the quickest driver to reach 50 wins. To date, he has 82 career titles to his name.

What wikipedia didn’t say is that our Jeff, like Brad Pitt, once was an ambassador for Tag Heuer. So let’s add him to our list of famous celebrities with Tag Heuer watches.

Here’s another pic of Jeff Gordon and his Tag Heuer. This time, he’s looking somewhat like Ewan McGregor! This guy should also try to be an actor because it looks like he can easily change the way he looks. 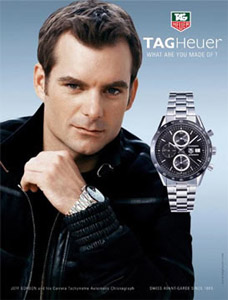 Let us take a close and more detailed look at this Jeff Gordon Tag Heuer Carrera watch, shall we? 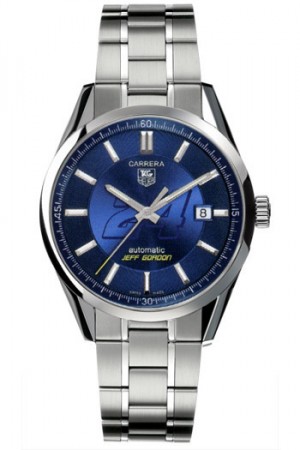