Maybe its an homage of sorts to the late British fashion designer?

The similarity of these wedding gowns — and there is no doubt in our minds that they are similar — gives rise to the following question: What would you do if a movie costume designer copied your design and you see it in a movie. 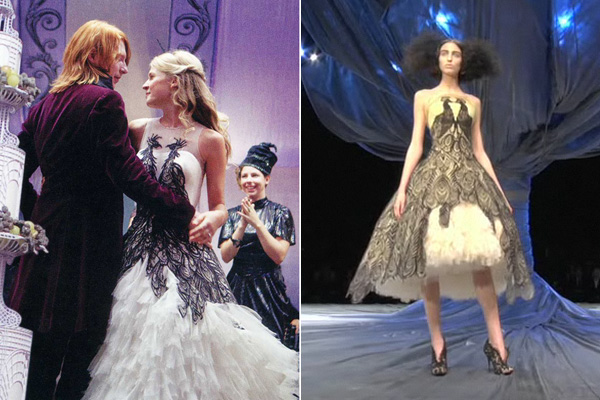 Our friend Deena says she won’t mind the copying if she’s already an established famous designer like Alexander McQueen. She would see the imitation as an homage to her work and move on. However, if she’s a struggling designer who has yet to make a name for herself, she’s going to sue the bejesus out of the movie producers for stealing her design. 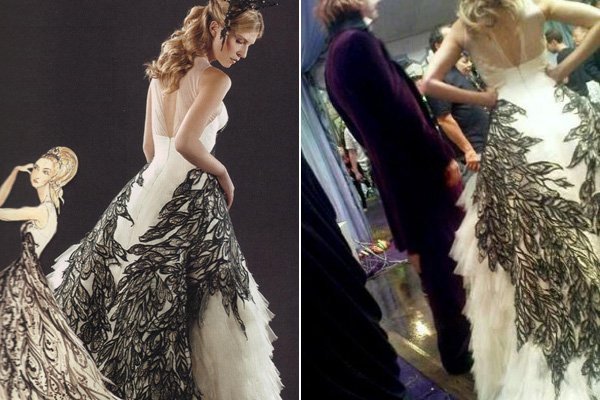 On the other hand, another friend Kevin has a different viewpoint from Deena’s. He says that if a costume designer copied his design and it appeared in a movie he is going to be happy about it and that he’s not going to be suing anybody. Why? Kevin believes that the movie will only bring attention to his work. In the competitive field of fashion, free publicity is the best kind of publicity says Kevin. It’s the reason why fashion designers freely give their dresses to Hollywood A-Listers.

We kind of side with Kevin in this debate provided that the copied design is used only for the movie. It would be one thing if the costume designer copied the wedding dress and then, on the side, mass produced them for sale to the disadvantage of the original designer. In this instance, the dress was only seen in the movie and the original designer can mass produce it himself/herself for those who’d like to buy a dress they saw in a movie.

That’s how it should work anyway. What do you think? What would you do if your design ends up copied in a movie?

For more wedding dresses, you might want to check out Khloe Kardashian’s Vera Wang dress as well as these Gypsy wedding gowns.