Ben Clarke Apprentice: Shirtless in Underwear (updated from 18 March 2009). Who’s looking for an underwear photo of The Apprentice’s Ben Clarke? You can now end your search. We once wondered whether he is the British version of Omarosa and maybe he is, cause he tends to be divisive like his American counterpart.

However, although we love her, we don’t think Omarosa will look as cool in a pair of Calvin Klein Santa boxer briefs  as the way Ben is chillin’ in the pic below. For a desk-bound dude, he’s actually in pretty good shape, no? We don’t mind seeing him like this if we’re working with him in an office. Hehe. 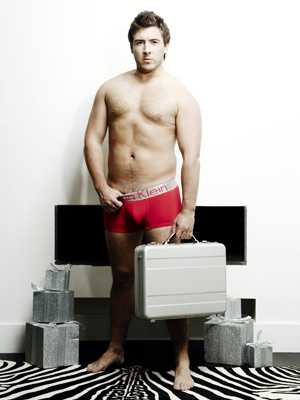 …..
Ben Clarke on the Apprentice (18 March 2009). We would be liking Ben Clarke and his money obsession if there’s no global financial crisis and if said crisis isn’t the result of money-obsessed financial douchebags. Hopefully Ben Clarke does not turn out to be a douchebag because we’d rather like him than dislike him. 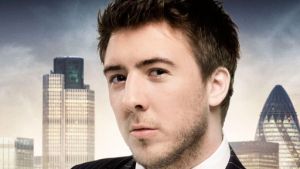 From the BBC: “Belfast born and bred, Ben is the rebellious stockbroker who considers himself to be ruthless and money-obsessed. The former Gavin Henson lookalike is inspired by the Playboy brand and cites Hugh Heffner as one of his most admired business figures. Rugby-playing Ben admits to being ‘cocky’ but insists that he takes business very seriously. He is a young professional with what he describes as a raw hunger to make as much money as possible.”

…..
UPDATE: The Apprentice’s Ben Clarke Fired From Real Job?. Look who’s been fired from his day job because he allegedly boasted to co-workers that he was cast for The Apprentice? It’s stockbroker Ben Clarke.

Says a colleague Brewin Dophin (via TV Biz): “Ben has the biggest head in the world. As soon as he knew he had been selected to audition for The Apprentice, he became unbearable. He would swagger around the office like he was a master of the universe. He’d tuck his thumbs under his braces and strut about.”

Brewin adds: “He kept saying, ‘I’m leaving you losers and going to win The Apprentice’. We all laughed — until we realised he was serious. Then the bosses found out — and he was sent packing.”

Jeeze. Is Ben a douchebag? We can’t bear people who call other people losers. Ben better win the whole shebang or else his former co-workers will have the last laugh.

Ben Clarke: Apprentice Fan “Tribute” Video. Is the BBC Apprentice’s Ben Clarke the British version of America’s Omarosa? He must be if he inspires “tribute” videos like this.