Tom Hiddleston Underwear (updated from 21 June 2016). Does British actor Tom Hiddleston prefer boxer or briefs underwear? Well, if his W Magazine photos are an indicator, maybe it is safe to assume that he likes boxer shorts. And, get this, he looks good in them boxer shorts underwear too. 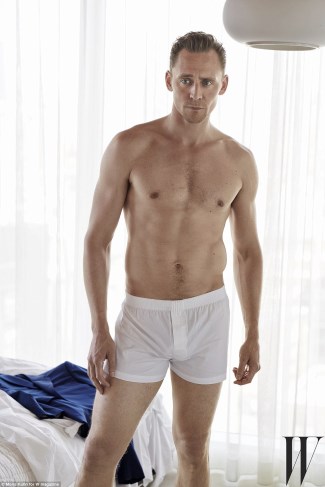 We thank W Magazine (particularly photographer Mona Kuhn) for these fabulous Tom Hiddleston underwear photos. Now, you know you did a great job as a photographer when you convince viewers to see the subject in a different light. For us, this is what these photos are doing for Tom.

Initially, we viewed him as a very good British actor who is less famous than — even if he is just as talented or just as good as — his peers like Eddie Redmayne or Benedict Cumberbatch. Now, because of these photos, some people — which adminttedly includes us — are seeing him in a different light. Maybe as as an object of desire? Hehehe. 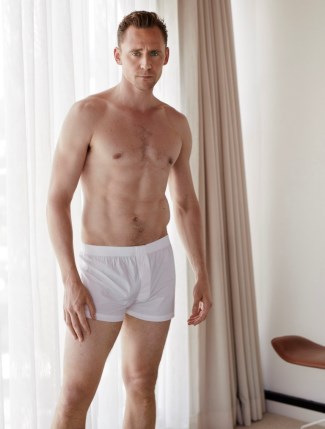 Who rocks his white boxer shorts better? Tom above or his British namesake Tom Ellis?

Anyway, Tom Hiddleston is also in the headlines these days because he is reportedly dating singing superstar Taylor Swift. We suppose this makes him cool to a lot of teenagers and tweeners who are Taylor Swift fans. But then again, who did she not date? From Nick Jonas, to Taylor Lautner, to Jake Gyllenhaal, to what’s his name that Kennedy Schwarzzeneger boy, and many more. Heck, maybe we will need more than ten fingers and ten toes to count Taylor’s ex-boyfriends. 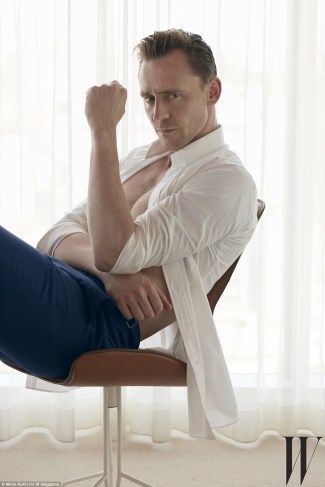 But, let’s go back to Tom and his awesome W Magazine photos. Rumor has it that he is being eyed as the next James Bond after Daniel Craig, who opted not to renew his badge Agent Double 007, exits the franchise. We are excited for Tom if these rumors are true.

We’re pretty sure he will make a great James Bond. But will the James Bond fandom accept a redhead Bond? After all, didn’t they go crazy protesting years ago that a blondie like Daniel Craig should not be James Bond?