Lily Allen Wedding Dress by Delphine Manivet. British singer and talk show host Lily Allen (full name: Lily Rose Beatrice Allen) has gotten herself hitched in a fabulous vintage-style wedding dress by French designer Delphine Manivet. Some people were expecting the bride to wear a Chanel gown by Karl Lagerfeld as the two are good friends but she will wear a Chanel at her wedding reception. 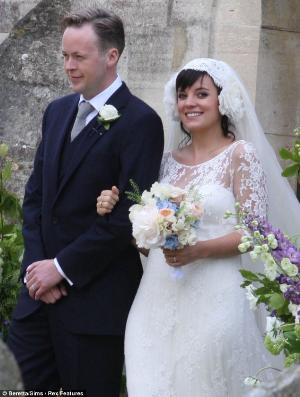 LILY Allen could not have found a dress to suit her more. Delphine Manivet’s creation was the perfect mix of Lily’s vintage style and the Parisian chic she’s demonstrated as a muse of Chanel’s Karl Lagerfeld.

The handmade lace gown was beautiful, and her look understated and chic. It was reminiscent of Kate Middleton’s but softer and less structured. I raise a toast to Lily – for being a sassy and modern but elegant bride.

Do you agree with Ms. Sayer’s review of Lily’s wedding gown? We here at Famewatcher agree 110%. How can you not give this dress a positive endorsement? 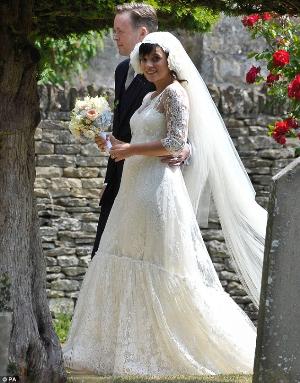 According to the Daily Mail, Lily and Sam Cooper had a traditional English country wedding at the beautiful St James Church in Cranham, Gloucestershire. The newlyweds have been dating since 2009 so no one was surprised when they decided to tie the knot. But they did surprise their guests at the wedding breakfast – and a pleasant surprise it was – when they announced that Lily is very much pregnant.

Says a guest about the pregnancy announcement (as quoted by the Daily Mail): “There were tears all around. This is the happiest day of Lily and Sam’s lives and they are so in love. This is the icing on the wedding cake!” It’s an icing on the cake indeed! The baby is due in November and a scan reveal that he or she is healthy. 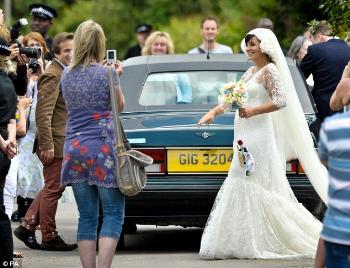 The pregnant bride is positively radiant and blooming, no? 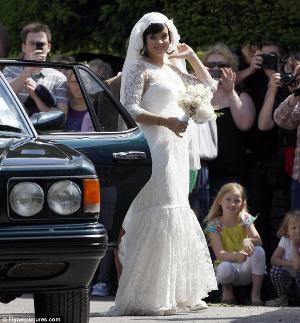 Congratulations to Lily and Sam for their wedding and their soon-to-be-coming bundle of joy!