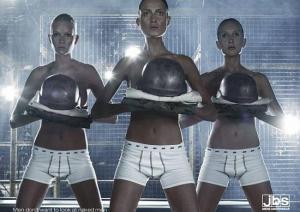 JBS Mens Underwear: Danish Female Models in Men’s Underwear. Today in controversial advertising (read: creative advertising), we bring you these print ads from a Danish underwear company, JBS, which featured female models wearing men’s underwear? Why, you ask? Because according to the company, “Men do not want to look at naked men.” So instead of hiring male models to wear their undies, they opted to use female models instead.

Best Womens Winter Coats: Hugo Boss Edition. If you are looking for a Danish supermodel, the name that comes up …