Young Johnny Carson: Shirtless + Underwear Photos. Former Tonight Show host Johnny Carson was a hot patootie when he was a youngling, no? In the pic above, our young Johnny looks so cute, so choir-boyish (who won’t hurt a fly), and oh-so-shaggable!

He looks pretty good without a shirt too. 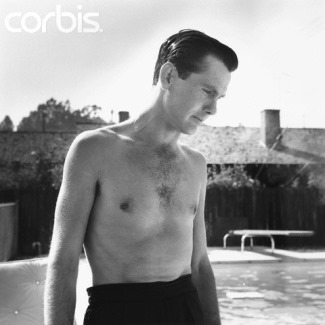 What is he doing in the next photo below? Is he wearing diapers? Hahaha. Why? Is he one of them Hollywood guys that our Aunt Selma told us who have a fetish for diapers? Hehehe. Or maybe he is ushering in the new year (1977?) coz the pic kinda reminds us of comic book illustrations where the past year is represented by an old man with a long beard and a cane while the new year is a crawling baby in his diapers. 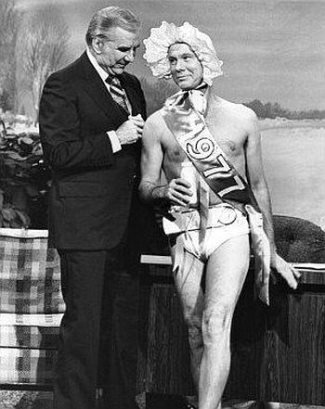 An older Johnny wearing nothing but a pair of Speedo swimtrunks. Who says older guys should not wear Speedos? Certainly not Johnny. And let’s give him props because he actually looks in pretty good shape unlike the 30-something guys we know who are fat, fat, fat, obese, obese, and obese. We are referring to you Michael, Darrell, Roger, Adam, Suni, and Lean. Sorry for calling you out guys but when an older Johnny Carson looks cool in his Speedos, there’s no reason why you should not too. Right? Come on now, get off your butts and head to the gym. 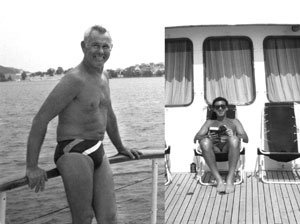 Want more guys of a certain age rocking their Speedos? Check out our earlier post: Older Men Wearing Speedos. By the way, for those of you wondering, the other dude in the pic above is his lawyer Henry Bushkin who went on to write a tell-all book about Carson. 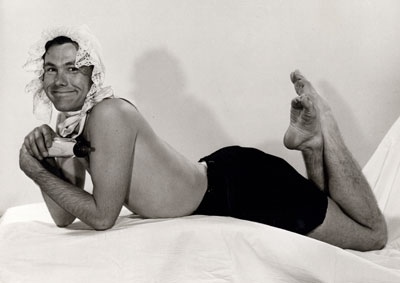 We hope Bushkin explained in his book why the late Tonight Show host appears to have a thing for wearing that headdress or whatever it is you call that thing on Johnny’s head.