Young Jessica Simpson Modeling Photos. Meet the younger version of Jessica Simpson. So this is what she looked like before she got, erm, curvier. We maintain though that the “rumors” that she cheated on Tony Romo with a dude named Ronald MacDonald is silly and unfair. 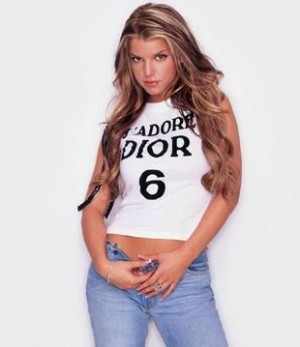 Hmm. What say you of young Jessica Simpson rocking her leather kilt for girls? 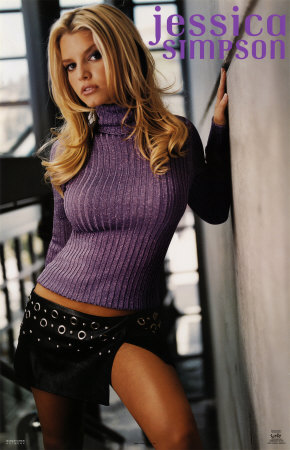 Want more photos of Jessica Simpson as a bikini and underwear model? Here’s one where our Jessica bares herself for her country. Photos like these should make American soldiers overseas stand up for their country. That’s what patriotism is all about isn’t it?

OTHER POSTS WE WROTE ABOUT THE NO LONGER YOUNG JESSICA SIMPSON:

Kim Kardashian on Jessica Simpson: She’s Hot (posted 28 January 2009). Jessica Simpson, who’s being criticized for being fat, got herself a defender in the person of Kim Kardashian. We are actually with Kim and Jessica on this one. Being curvy is way hotter and way healthier than being skinny. Way to go, Kim.

Here’s what Kim said about Jessica according to People Magazine: “Call me crazy, but when I saw the picture [of Simpson performing Jan. 25 in Pembroke Pines, Fla.], I was like, ‘Oh my God, Jessica looks hot!’ I actually love the outfit. I think she looks amazing. I love high-waisted jeans, I loved that belt, and her hair looked fabulous. I get that she does look curvier, but to me, there’s nothing wrong it.”

She adds: “I love curves. Being super skinny just isn’t attractive to me. When I saw that picture, I knew everyone was going to say something. And I thought, ‘You know what? Leave Jessica alone!’ She’s fabulous, she’s a really sweet girl, and I admire her for putting up with it’.”

Okay Kim, we get what you’re saying. It’s all good but you’d do better if you release your secret sister Khourtina Kardashian from her dungeon prison?

Meet Jessica Simpson, Fashion Designer (posted 12 February 2009). Let’s give Jessica Simpson props for making a lemonade out of lemons. She’s been criticized (unfairly, we must say) for gaining weight. She’s now using her experience as a curvy woman to design clothes for curvy women.

Sez Jessica (according to the Daily Mail): “I want to create clothes that flatter every figure. I know how a dress can make you feel so frumpy. I promise mine won’t. I know what flatters a woman, and trust me, I’ve been judged a lot in my life. By now I know what works if you’re curvy. If my clothing and accessories make you feel great and let you walk proud and tall – in big, big platform shoes – then I’m happy.”

We hope she succeeds in her endeavor. 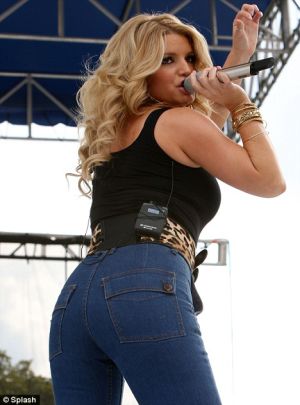 So, what do you think of the above younger Jessica Simpson as a model? And how would you compare her to her later version? Say your piece in the comment section.