Hot Female Pilots. Of course male pilots don’t have a monopoly on hotness. Female pilots can be pretty hot and pretty badass like their male counterparts. So we made a list of female pilots who are proving through their lives that girls can be “air conquerors” and for whom the sky is not the limit.

Anyhoo, let’s start our list of hot female pilots with:

The RAF Fighter Pilots. Back in 2006, The Telegraph described the pair of then Pilot Flight Lieutenant Juliette Fleming (left) and then Navigator Squadron Leader Nikki Thomas (right) as the “first all-female Tornado jet crew to fight in Afghanistan”. Nearly 10 years later, Thomas is now a Wing Commander and is the UK’s first woman RAF bomber commander. Meanwhile, according to her linkedin profile, Fleming also continues to be with the RAF as the “22 (Trg) Gp DFT HQ Fast Jet Staff Officer”.

END_OF_DOCUMENT_TOKEN_TO_BE_REPLACED

Emma Parker Bowles: English Girl in Work Coveralls. If you are looking for a reason to hate Jesse James aka Mrs. Sandra Bullock, here’s a legitimate one: he stole a television idea from an English lady who ended up working as a car mechanic. Seriously, it’s true!

Here’s the dish on Jesse James from Emma Parker Bowles in the Daily Mail: “Anyhow, Jesse and I were going to do this awesome car show together and I was going to ride to glory on his coat-tails. That was the plan. In reality, he stole all my ideas and went off and did his own show. Charming.”

END_OF_DOCUMENT_TOKEN_TO_BE_REPLACED 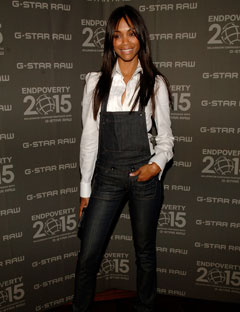 If you think all we do is blog about men’s coveralls, well you are right because that’s what we just did. But we’d like to make amends to our girl readers by blogging about women in coveralls too. Check out Dominican American actress Zoe Saldana (we loved her in Pirates of the Carribean).

Then here’s Nicole Richie dressed in her overalls with husband Joel Madden. END_OF_DOCUMENT_TOKEN_TO_BE_REPLACED