Will Smith Underwear. What kind of underwear does the Hollywood A-Lister prefer to wear? Apparently he likes him his boxer briefs. Here’s a really buffed and bulging Will Smith in boxer shorts. 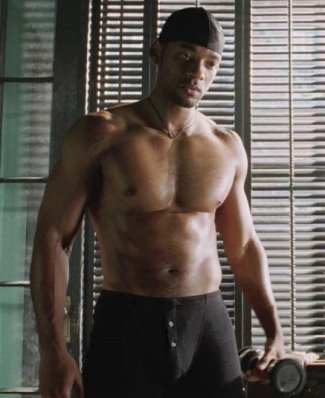 Does anyone know from what movie this still photo is from? Another pic of Will below. If we are not mistaken, these photos are from his movie, I Robot. 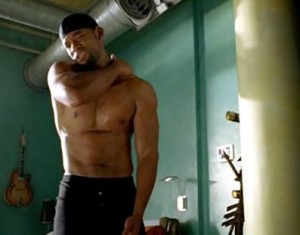 For more on this Hollywood A-Lister, check out our post on Will Smith’s Belstaff Leather Jacket. Or maybe you’re more interested in more male celebrity underwear?

UPDATE: As some of you confirmed in the comments, the photos above are indeed from I, Robot a 2004 science fiction action movie about a servant robot who may or may not have killed its human master.

Will Smith Shirtless Workout. Here’s a shirtless Will Smith working out in I, Robot. 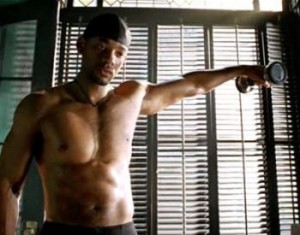 How did he get in such a terrific shape? Men’s Health has what it claims to be the Hollywood superstar’s workout plan as revealed to them by his trainer Darrell Foster:

SMITH’S PROGRAM
Each of his 5-day-a-week lifting sessions focused on one or two body parts. He ran at least 5 miles 6 days a week, and he boxed twice a week. “There is no better fitness regimen than the one a professional fighter uses,” Foster says.

SMITH’S PROGRESS
In 3 months, Smith’s bench press increased by 75 pounds, to 385–35 pounds more than he benched during Ali. A high-protein, high-carbohydrate diet maximized muscle repair. With his metabolic rate cranked up from the extra muscle, he slowly reduced his food intake to burn fat, cutting–but not eliminating–carbs. You need carbs to keep your brain sharp and fuel your workout routines, says Foster. After 6 months, Smith’s body fat had shrunk to 7.5 percent, down from 12 percent. And all those zero-body-fat robots never had a chance.

The Academy-nominated actor also appeared in another sci-fi movie, I am Legend, which also showed him working out with his shirt off. Check out his movie workout photos.

Will doing that “pull up my whole body” thing.

Will Smith working out with the pull-bars

Want the video version of his workouts in I am Legend? Here you go!