Who is Monica Zelensky? Why is she famous? Why are people talking about her and United States President Donald Trump? What’s her deal? Is she kind of like the Stormy Daniels girl who was reportedly hired by the president to do the horizontal dance with him?

If you ever asked the above questions, then maybe you are like our grandma Akita who read something about Monica Zelensky and something about Trump on Facebook. Intrigued, our nana asked us to tell her more about this girl because she never heard of her before.

Well, since we ourselves have not heard of any Monica Zelensky, we decided to dig deeper on the internets to find out what our grandma is talking about.

Our findings? It turns out that there really is no Monica Zelensky. Well, there may  be a girl out there in the world by that name but she would not have something to do with the Orange Humpty Dumpty. Or, in other words, there is no Monica Zelensky associated with Trump and his endless scandals.

So maybe Grandma Akita misread what she saw on Facebook? Well, if her eyesight is good it is likely that she did not misread anything. Apparently, Monica Zelensky is a name that some jokesters in Ukraine are calling their President (President Volodymyr Zelensky) on social media.

Huh? Ain’t that kind of mean? 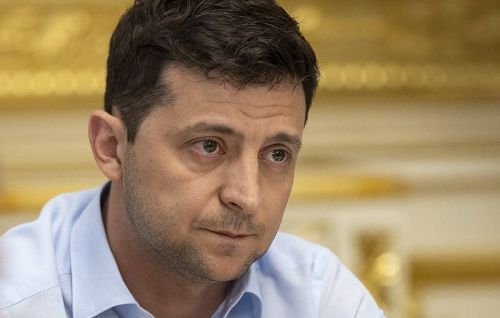 That’s social media for you. But, as we said, it’s a joke and since President Zelensky himself is a comedian, we’re pretty sure he is taking it well, you know, grinning and bearing it.

But why are they calling him by that name? Well, we gotta go back to the past on this one. Remember or ever heard of Monica Lewinsky? She’s a central figure during the impeachment of then U.S. President Bill Clinton in the 1990s. She was an intern at the White House back in the day and President Clinton took some interest in her and they reportedly did some hanky panky in the oval office which led to his impeachment by the Republican Congress.

Now, if you’ve been following the news lately, President Humpty Dumpty appears to be on track to being impeached by a Democratic Congress because of his shenanigans which involves President Zelensky. No, Donald and Volodymyr didn’t do some hanky panky a-la Bill and Monica but, if the Trump impeachment pushes through, President Zelensky will be a central figure in the proceedings.

So since Monica Lewinsky and President Zelensky are both central figures in the scandals of a sitting American President, our naughty Ukrainian friends on social media put the names together and took to referring to their President as Monica Zelensky.

There you have it! Mystery explained.

As for why President Trump may be going to be impeached, it’s the allegations that he, contrary to U.S. law, pressured his Ukrainian counterpart to investigate the son of former U.S. President and current presidential candidate Joe Biden. You can read more about it on proper news websites.

So there you go, we hope we gave you the answer to those who asked the question, Who is Monica Zelensky.