Finally, Lisa Kudrow’s Who Do You Think You Are is going to be aired next week on NBC. Here are some interesting family background for the celebrities who are going to be featured in the show:

1. Sarah Jessica Parker had an ancestor who participated in the famed 19th-century California Gold Rush and another who was accused of witchcraft in the 1692 Salem witch trials.

2. Matthew Broderick’s grandfather was a 22-year-old medic in World War I who was wounded and awarded the Purple Heart.

3. Susan Sarandon’s maternal grandmother had been pregnant and married by the time she was 13.

4. Brooke Shields is a direct descendant of Henry IV of France.

5. Lisa Kudrow’s great grandmother had been ‘killed and burned’ with 900 Jews during World War II.

Aren’t this very intriguing discoveries? Why NBC took its own sweet time to air the show is beyond us. 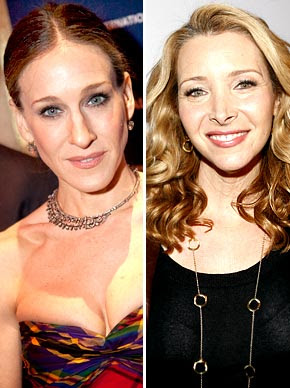 We love Lisa Kudrow. We love her and her Friends character, Phoebe Buffay. In fact, we must admit that our favorite Friends episodes would be the ones where the focus is on her (and we hated all that repetitive Ross/Rachel loves/hates Rachel/Ross storyline).

Anyways, we are thrilled to find out that we will be seeing Lisa soon in the boobtube through NBC’s Who Do You Think You Are. It is reportedly a documentary about discovering your ancestors. I think she’ll be starring in the first episode only but she is also executive producing the show so she’ll really be a part of it.

Congratulations, Lisa. We hope this show becomes a hit :-)

Btw: Sarah Jessica Parker will also be a part of it, in case you are wondering why she’s in the picture.