Vito Cammisano Shirtless Photos: Michael Sam’s Swimmer Boyfriend. Ever since college football star (and now NFL rookie) Michael Sam came out of the closet, everyone and their mother have been talking about the young footballer and his bravery. “Everyone”, of course, includes us here at Famewatcher because we did a blog post on Michael (see Michael Sam Underwear) but we were very wrong when we mentioned that his boyfriend is a certain Sean Smith. In fact, Michael’s boyfriend is a certain Vito Cammisano.

So who is this Vito? Does he look good shirtless? Is he hawt? Is he a good and proper match for our Michael? Well, they say a picture speaks a thousand words so let’s have this photo of the young lovebirds answer your questions. 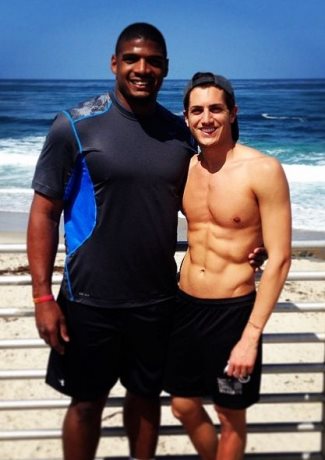 Yes he looks good shirtless. Yes he is hawtie with a swimmer’s body. And, yes, these two look like a good match. In fact, they look happy together so we’re going to say that the match is made in heaven. Here’s another Vito Cammisano shirtless photo. Who’s the lady friend? 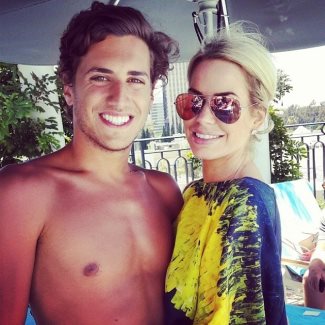 Hey, Vito, that’s not how you drink from a water bottle! Do you want to drown yourself? 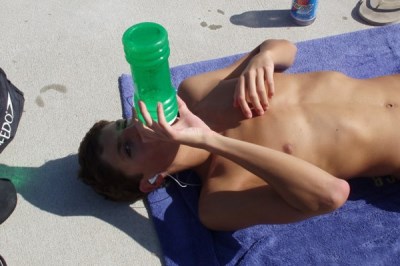 Before he became known as Michael Sam’s boyfriend, Vito was a standout college swimmer from the University of Missouri. 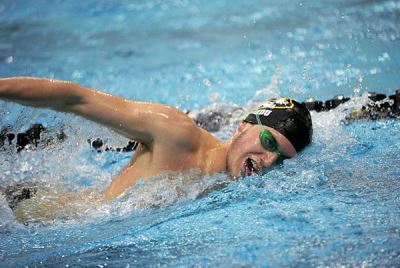 Here are some of Vitto’s swimming photos while he was still in college (courtesy of columbiamissourian.com). 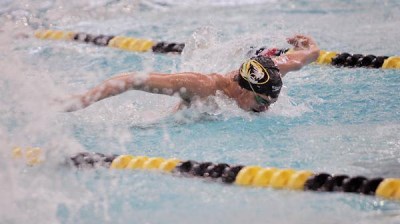 Is he a good swimmer? Well, he’s not as good as, say, Ryan Lochte but he was a pretty good college swimmer. From heavy.com:

Like Sam, Cammisano was an athlete at Mizzou. He was on the University of Missouri’s swim team from 2009-2012 after starring at Rockhurtst High School in Kansas City and for the Kansas City Blazers. According to his bio on the Mizzou athletics site, Cammisano placed fifth in the 1,650 freestyle and 10th in the 500 freestyle consolation event at the Big 12 conference championships as a freshman in 2009-10.

So how did these two lovebirds found each other? Well, let’s have Michael Sam himself tell us the story. From Out Magazine:

“We didn’t start off as huge fans of each other,” he says. It was a lingerie party, and Cammisano was dressed as a rabbit, his underwear amplified by a bushy white tail.

Sam remembers the tail because when he first saw him, Cammisano was bent over the railing of a second-story garden deck, violently puking.

“I went up to him to ask if he was OK, and he started cursing at me, screaming, ‘Fuck off — do you know who I am?’ ” A new kid at Mizzou, Sam wasn’t aware that Cammisano was a star swimmer.

But they met again two years later and, this time, sparks flew between them. More from Out Magazine:

By the time they were reintroduced by a mutual friend during Sam’s junior year, Cammisano had come out as gay. Sam, though, was still in the closet. One night, the trio went out together to a bar.

“I could see he was interested,” Sam said. “I bought him a couple of drinks, got us tipsy. Toward the end of the night, I put my arm around him, and it was over.” The two started dating, but Sam was concerned about his teammates finding out. “Everyone knew Vito was gay, so we couldn’t even be seen together. There was a lot of climbing out of michael samwindows.”

Eventually, the two split. As time went on, though, Sam grew more comfortable with being gay and the couple got back together before Sam’s senior year.

This time they made no efforts to hide their relationship, and Sam decided it was time to formally come out to his team. “Vito was really the person who showed me I had to do it,” Sam said. “I wanted us to be comfortable.”

Well, may the two be comfortable together for the rest of their lives!

2020 Update. Michael and Vito got engaged but then broke up in 2015. Such is life. We do not know if they each have their boos at the moment but Vito continues to regale his fans with his Speedo-wearing ways. Yay! Check him out on Instagram @vitcamm. 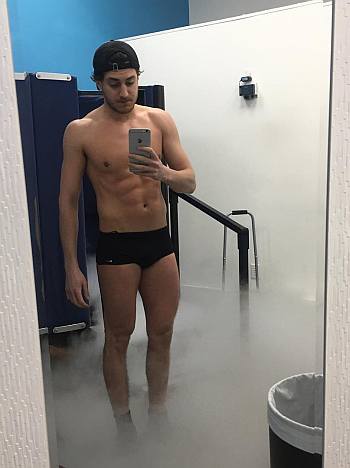