Vintage Ladies Watches: Elgin Watch Advertisements. Today in vintage watches for ladies, we bring you Ann Blyth and her Elgin Watch from the 1950s. Honestly we had to do some googling to know more about Ann and her watch.

Here’s what we dug up about our Ann (via wikipedia): “Ann Marie Blyth (born August 16, 1928) is an American actress and singer, often cast in Hollywood musicals, but also successful in dramatic roles. Her performance as Veda Pierce in the 1945 film Mildred Pierce was nominated for an Academy Award for Best Supporting Actress.”

Meanwhile, also according to wikipedia, the Elgin watch you see in the print ad above was manufactured by the Elgin National Watch Company which had its factory in Elgin, Illinois.

It closed its operations in 1964 but sold the rights to the name “Elgin” to a company called MZ Berger Inc.

According to wiki, MZ Berger “specializes in manufacturing its watches in China and distributing them outside the traditional watch dealerships. Elgin-branded watches produced after 1964 have no other connection to Elgin or the Elgin Watch Company.”

Aside from Ann Blyth, the Elgin Watch Company also featured other female celebrities in its print advertising campaigns. Check them out below: 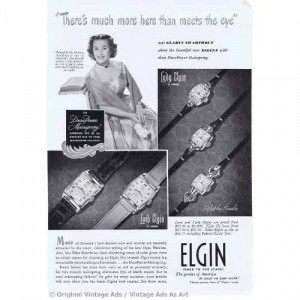 Gladys Swarthout (1900-1969): Opera singer and actress from Missouri. She is more successful as a singer having sold out records and concerts but her acting career is more of a box office bomb. 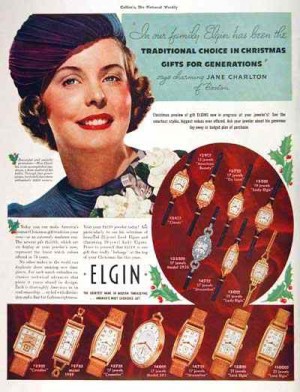 Jane Charlton: Who is Jane Charlton? That’s the question we asked ourselves and continue to ask when we saw this vintage ad featuring her.

If you know this woman who claims that Elgin watches are “the traditional choice in Christmas gifts for generations” in their family, then do tell us more about her in the comments. 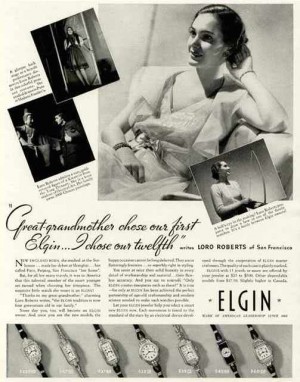 Loro Roberts: Again, we’re not sure who Loro Roberts is, but based on the Elgin ad below, we’ll go ahead and assume that she was a popular stage actress back in her day.