Tom Hintnaus Vintage Calvin Klein Underwear Ad + Present Photos. If you are in your 40s and above, you might have heard of Tom Hintnaus. If you haven’t heard of him yet, well, that’s Tom in the photo above wearing a tightie whitie underwear by Calvin Klein. At the time this picture was used for a CK billboard in New York’s Time Square, it created quite a stir because at that time (we’re talking 80s here) people weren’t used to such a bare and intriguing public display of the male body. 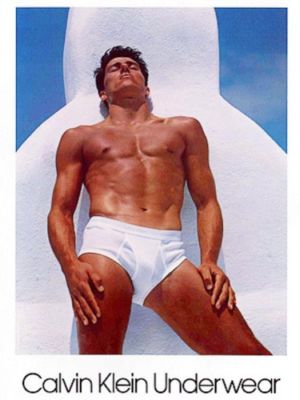 Anyhoo, Tom Hintnaus was an American Olympic pole-vaulter who also modeled on the side. He’s still rocking his tighty whitie underwear in these photos (via the Honolulu Advertiser) taken three years ago. 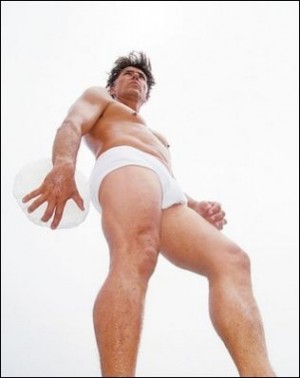 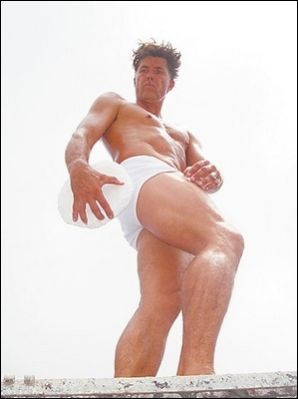 …..
What is Tom Hinthaus Doing Now?. So where is the pole-vaulter turned underwear model living these days? According to TMZ, Tom is now living in Honolulu, Hawaii. What is he doing now? His IMDB profile states that he builds decks for private homes.

Here’s a photo of Tom from back in 2007 when he, along with former Calvin Klein models, attended the 25th anniversary party for the famous brand. Tom is the older guy on the right. The other models are (from left): Michael Bergin, Joel West, Antonio Sabato, Jr. 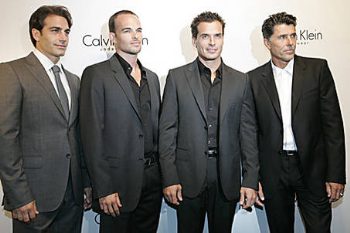 Would you believe that these guys became famous for modeling underwear. Tom was apparently uncomfortable with the idea saying something like, “I worked so hard to be the best pole vaulter in the world and I ended up being more well known for putting on a pair of briefs” but we think he should be heartened by the fact that his iconic underwear photo has been named as one of the “10 Pictures That Changed America” by the American Photographer magazine.

And for us who admire men in their underwear, we have Tom to thank for opening the road for men to be admired for their hot bods. Hehehe.