Tom Felton and Girlfriend Jade Olivia. Are you like, “Who is the girlfriend of Tom Felton, you know, the Harry Potter bad guy with the blond hair?” Well, we’ve got the answer for you….. the girlfriend of Tom is ….. Jade Olivia. Yup, she’s the one in the picture with Tom. The couple, with Daniel Radcliffe, recently visited Harry Potter stuntman David Holmes who is still in the hospital.

Here’s what Tom says about his girlfriend’s casting: “The producers actually came to me about six months ago and asked me, and I was like, OK, I’ll ask her. She was slightly reluctant but I pulled her arm and twisted it and then she was filming with me for three days at King’s Cross.” [Quote via MTV News]

So jealous girls (and we presume some boys too) of the internet, you can say what you want of Jade Olivia but at the end of the day she’s still the one snogging the gorgeous Tom Felton. Who knows, she might end up marrying him too – in real life this time. Anyhoo, here are some more photos of Jade and Tom as they live their life as a couple in the public eye.

Tom and Jade vacationing in Miami. Hey Jade, we’re okay with you now as Tom’s girlfriend, but that bikini swimsuit is ugly. 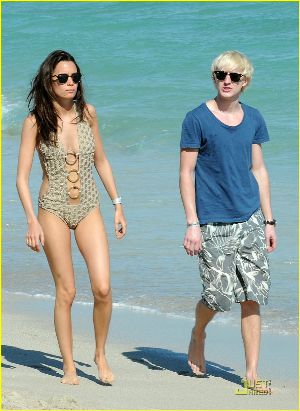 The young couple at the Empire Awards. 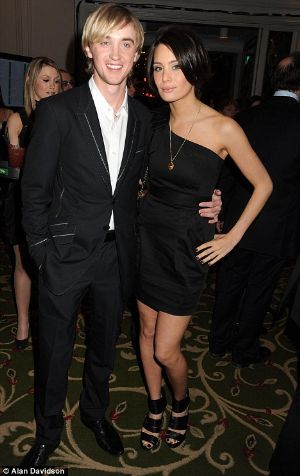 Tom and Jade at a Harry Potter premiere in New York. 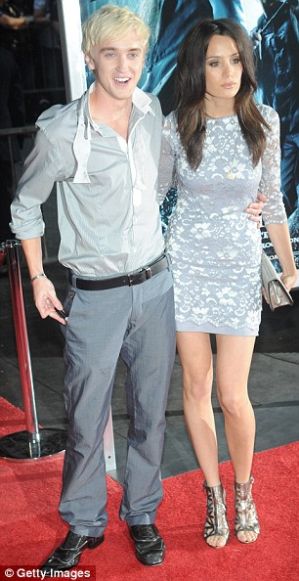 Enough with the pictures already, time to answer some of your Google questions like:

what is the name of tom felton’s current girlfriend as of november 2009? Duh, her names Jade Olivia!

who is jade olivia? Duh, she is Tom Felton’s girlfriend! She’s a British girl from Leeds. According to Harry Potter Wiki, she was born 9 February 1987. She has two brothers.

do you think jade olivia is pretty? Prettiness is in the eyes of the beholder. But to answer your question, initially we thought she’s not pretty enough for Tom but she bloomed and got gorgeous. Now we’re kind of thinking that she’s too pretty for Tom. Hehehe.

what does tom felton’s house look like? Beats us! We hope it looks as fabulous as Simon Cowell’s home.

tom felton and girlfriend jade broke up? tom felton breaks up with jade? Nah, we think you’re just wishful thinking. To date, they’re still a couple. It looks like there’s no breaking up this two.

jade olivia skinny: Hmm, she looks normal to us. Do you fangirls and fanboys think she is skinny?