Tom Cruise Closet Secret: Elevator Shoes? Remember the hilarious South Park episode which focused on Tom Cruise hiding in the closet? Despite the encouragement of his fellow Scientologist John Travolta as well as his ex-wife Nicole Kidman to come out of the closet, Tom adamantly refused to do so. In fact, if we remember correctly, he decided to stay hidden in the closet until the second coming of Xenu.

Everyone assumed that the show was about Tom’s homosexuality but the Mens Shoe Style blog asserts that the only thing the Hollywood actor is hiding in the closet is his elevator shoes because, you know, Tom is actually 5’7″ tall pretending to be 6’1″. That’s why he doesn’t want other people to be peeking at his closet lest they see the Hollywood star’s elevator shoes which, according to rumors started by us, is specially designed by Christian Loubotin. [That Loubotin thing is a joke, please don’t sue us.]

OTHER POSTS RELATED TO THIS TOPIC

How tall is Tom Cruise? We speculated that he’s 5’7″ but that’s a figure we picked out of a really thin air. There is no doubt however that he wears elevator shoes as we also speculated. He is shorter than his wife which is evident in this picture. 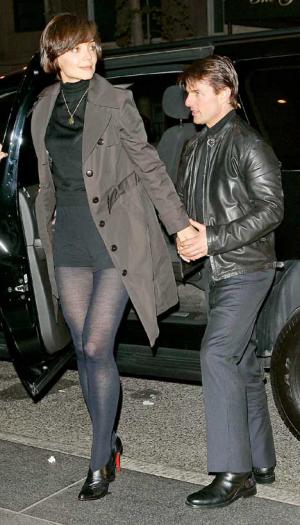 Okay, okay, we’re not really sure if this pic is “natural” or whether it is altered by someone who wants to make Tom shorter than his wife? Does Katie Holmes really tower over her husband as this picture suggests? What do you think? 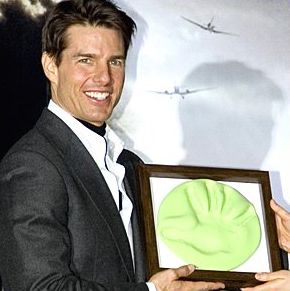 Why does this photo look so “alieny”? Seriously, it is! Although, to be fair, this was taken in South Korea (or is it Japan?) where Tom Cruise is technically an alien.

Question for you Famewatchers: If the size of a man’s hands is directly proportional to the size of his dick, does this mean that Tom is gifted down there? Unfortunately only Nicole Kidman and Katie Holmes and some massage boys (joke!) knows the answer to that question.

But if you can decipher a man’s endowment by merely looking at his underwear then you might be able to determine this Hollywood A-Lister’s size by checking out our post on Tom Cruise’s underwear.