Tom Cruise Underwear. Look who’s wearing some tighty whitie underwear? It’s Hollywood superstar weirdo Tom Cruise back in them days when he was a hot guy. 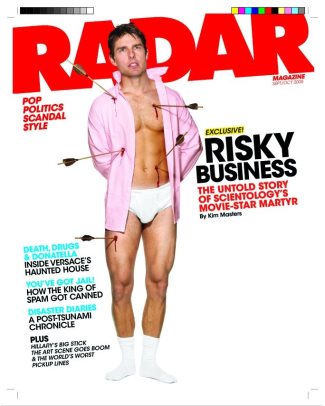 Okay, we got to admit that we are not quite sure if the above photo is real or photoshopped but the images below are 100% real. In fact, they are from the 1999 movie Magnolia where he plays the role of a motivational speaker peddling a pick-up artist course to men.

All we gotta say is, to quote our favorite Survivor contestant, “dot, dot, dot….. hmmmmm”!

Here’s another Tom Cruise underwear scene from Top Gun, probably his most iconic and most beloved movie role. 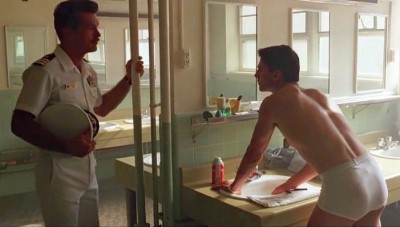 UPDATE: We should have included this video of Tom Cruise dancing in his underwear in the 1983 film, Risky Business. But it’s better late than never, so here’s the video. He used to be so likable and so cute back then, no?

In case you are wondering, the young Tom is dancing to Bob Seger’s Old Time Rock and Roll.

Ever since he has become superfamous, our Tom has not had any underwear scenes in his later movies. Right? Or maybe he did? Maybe he has underwear scenes in the Mission Impossible movies? If he does, well, do tell us so we will look for ’em and include the images here. Anyhoo, we gotta admit that ever since that Oprah thing, we kinda became disinterested in the guy and have not watched his movies. They are getting same-o same-o anyways.

Now, we will end this update with a fake Tom Cruise underwear photoshop obviously made by a superfan. Check it out:

Not bad, eh? Kinda believable. However, when it comes to fan-made celebrity underwear fakes, no one comes close to the fans of Supernatural actor Jensen Ackles. Go check out these fake Jensen Ackles underwear photos to appreciate the dedication of Jensen’s superfans.